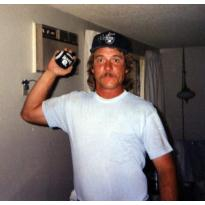 Dave was born to John and Marjorie Nevill on February 17th, 1957 in Lynwood, California.
He was the youngest of three brothers, Bill Maris, Mike Nevill and Dave Nevill.
Dave ended up in Costa Mesa, California during his early years. Dave continued on and found his first love to be music. He was a skilled drummer and part of various bands including Good Neighbor John, Agent X, and Rollokor. During his years as a drummer, Dave met his wife Sue. They were married when he was 24 and 2 years later had their daughter Leslie. Dave had a talent for drawing and he used his talent to draw cartoon characters for his daughter and liked to make his coworkers and friends laugh with his artwork. Dave always loved being silly and having a good laugh. Another side of Dave was his interest in history. He could sit for hours and discuss history, and especially was interested in WWII. Above all other things he enjoyed football. He was crazy about the Raiders. He would get himself all riled up during the Raider games and will always be remembered as one of the biggest Raider fans.

During the early ’90’s, Dave moved to Colorado. Although he was no longer married he always remained close with Sue and Leslie. Leslie would visit him in the summers and Dave would come to California to visit Leslie. Dave made sure to attend Leslie’s junior high school graduation, her high school graduation and her 16th birthday. Dave and Leslie were best friends, they talked and texted regularly.

While living in Colorado, Dave eventually met his 2nd wife Dana in 1997 and had his son Jadie in 1998. Denver Colorado is where he remained until his early passing at the age of 52. Dave will always be remembered for his loving heart, his music, art, intellect and hilarious sense of humor.

We will all miss him deeply.