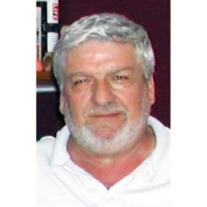 David was born on December 1, 1943 in Indianapolis, Indiana to Robert & Beatrice Griffin. He came to California with his family in 1948 and attended Arroyo High School in El Monte, California, Class of 1961. That same year, David proudly entered the United States Air Force where he remained until 1965. Upon his honorable discharge, he began a long career with Douglas Aircraft until his retirement in 2007.

His many loves included God, family, his country, aviation, traveling and much more.

David was preceded in death by his parents; his sister, Marlene & brother-in-law, Jim. He is survived by Cathy Gibbs, his wife of 31 years; one son, David M. Griffin & wife, Lisa; three grandchildren, William, Natalie & Charlie, and one more on the way. He is also survived by sisters, Carole, Bobette (Bob), and Sherri (Mike); and many nieces, nephews, and friends who loved him dearly.

In lieu of flowers, donations can be made to the Disabled American Veterans. David will be laid to rest at Riverside National Cemetery.