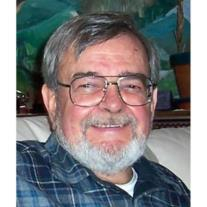 David Whitney, 79, of Mission Viejo, passed away on December 2, 2015 following a stroke. Dave was born January 4, 1936 in Rutland, VT and was raised in Middlebury, VT. The oldest of five children, he made maple syrup, raised a blue ribbon bull and was a page in the Vermont legislature. He joined the Vermont Air National Guard and then enlisted in the Air Force. Initially he was stationed in Iceland where he became the night disc jockey, then stationed in California where he met Cathy Small of Los Angeles. He fell for her immediately and convinced her to marry him. Catherine and David Whitney were married for 55 years and lived a life of learning, travel and hard work. They lived in Virginia for 10 years before returning to California. Dave was a primary force in the Air Traffic Control community, both domestic and foreign, for over four decades, working with all branches of the service. He had a lifelong love of ham and shortwave radio and following his retirement he spent many hours contacting people all over the world. He loved airplanes, trains, John Wayne and Pavarotti, and was passionately patriotic. He loved camping, fishing and hiking, especially in Kings Canyon. He loved to travel and meet new people, but mostly he loved his family.

He adored his wife and three daughters, his sons-in-law and grandchildren and is dearly missed by all who knew him. David is survived by his wife Catherine; his daughters Elizabeth Whitney Barnes (Christopher) of Sparks, NV; Kirsten Lazio (Tony) of Mission Viejo, CA; and Laura Scott (Kent) of Paradise, UT; as well as his grandchildren Julianna (18), Bodie (15) and Alex (11) and step-grandchildren Clayton (19), Corynn (17) and Alyssa (15). He is also survived by his sister Carol Cox (George), his sister-in-law and brothers-in-law and numerous nieces and nephews and extended family who all adored their Uncle Buddy. He was preceded in death by his parents, Hazel and Harry Whitney, his brothers Chuckie and Bobby, his sister Margaret Torvinen, his in-laws, Nelson and Eunice Small and many other family members who greeted him lovingly as he returned home.

Funeral mass will be held January 2, 2016 at 11am at St. Kilian’s in Mission Viejo with a reception to follow immediately. Burial will be Monday January 4, 2016, which would have been David’s 80th birthday, at 11:15 am at the Riverside National Cemetery.

The Whitney Family thanks you for your floral tributes to David and wants you to know that any flowers sent will be donated after the funeral and burial services to patients at Mission Hospital.