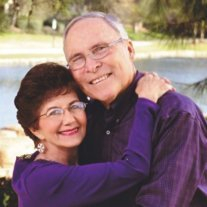 Darold was born in Wilmar, California and spent his first seventeen years with his parents and older sister, Joan, in their home in South Pasadena, California. He graduated from South Pasadena/San Marino High School in 1953 and joined the USAF. He turned eighteen in South Korea serving his country as a F-86 Sabre Jet hydraulic mechanic. He spent a year and a half in Korea and Japan and finished his four year commitment with the Air Force at George AF Base in Victorville, California.

Darold met Janet in 1962 and they were married January 23, 1963 in Pasadena, California. Their first child, Derek Christian, was born in Arcadia, California in 1967. They moved from Arcadia to Mission Viejo in 1969 and Janet gave birth to their second child, Cynthia Janelle, in December of that year in the hospital at South Laguna Beach.

Darold spent his working career as a salesman, his last 30 years as a Forklift/Warehouse Equipment sales representative for Hyster Company, Johnson Machinery and Select Equipment. His recreation time his whole life was spent playing baseball and softball, and he loved it. He played until he was 74, finishing out his ball career with the Fairway Ford softball team. He and Janet also loved playing golf together and were fortunate enough to play beautiful golf courses all over the United States, due mainly to the generosity of Ron Pearce, owner of Fairway Ford.

Darold and Janet joined Saddleback Church in 1987 and have loved serving there ever since. Darold leaves behind his wife, Janet, his son Derek and wife, Colly, and grandchildren Kallen and Forest; and his daughter Janelle, her husband Mike and grandson, Michael.

I want you all to know how God through his Son, Jesus Christ, has blessed my life. I certainly did not deserve his blessings but, nevertheless, I received them. First of all, he gave to me the most wonderful wife and best friend that any man could ask for. Second, he blessed my wife and me with two wonderful children that love the Lord and are striving to live their lives for Jesus. He has also blessed us with three grandchildren, Kallen, Forest and Michael. I love my wife and children so much, and I am looking forward to our reunion in heaven when God calls them home.

Forgive me if knowing that I am now in heaven sounds arrogant. I am confident in that fact, but the confidence is not in me, but in Christ. In September 1963, at a Billy Graham crusade, I believed God when he said, “He so loved the world that He gave his one and only son, that whoever believes in him shall not perish but have eternal life” (Jo. 3:16). Billy went on to say, “And this is the testimony; God has given us eternal life, and this life is in his Son. Whoever has the Son has life; whoever does not have the Son of God does not have life. I write these things to you who believe in the name of the Son of God so that you may know that you have eternal life” (1 John 5:11-13).

That night I received Jesus Christ as my Savior and Lord. Wow! All through the scriptures, God has told us we can come to him but only on His terms and His way. Jesus said of himself, “I am the way, the truth, the life; no one comes to the Father except through me” (Jo. 14:6). Through Christ’s death, Christ made it possible for us to get back in a right relationship with God, which was broken when Adam sinned. God accepted Christ’s payment for our sin and when we receive Christ’s payment for our sin, he says we will have eternal life. What a deal, “For it is by grace you have been saved, through faith, salvation is not of yourselves, it is a gift of God, not of works so no one can boast” (Eph. 2:8-9). Jesus calls us to receive and follow Him, to pick up our cross daily and learn from Him. So don’t think that salvation is just fire insurance. God calls us to give up our life of selfishness to truly find real life; it is a lifelong pursuit in this world of living to become more like Christ. If you haven’t discovered this yet, it is never too late, God created you for a purpose and He beckons all to come to him. If you haven’t made Christ Lord of your life, I pray that you will have ears to hear today as God speaks to you through His word that will be given by my good friend, Francisco Coronel.

If anyone would like to make a donation in Darold’s memory, please consider the following ministry:
FOCUS Ministries:
300-A Squaw Valley Place
Pagosa Springs, CO 81147
www.focusministries.org