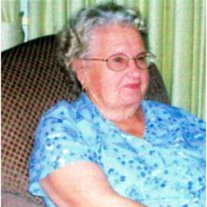 Darlene Little was born Darlene Evon Stankey on September 25, 1931, in Los Angeles, California, a second-generation California native. She was the oldest child of George and Trieva Stankey and remained the only child for a decade, until her little brother Darron came along. She enjoyed a happy childhood, roller-skating and playing jacks on the sidewalks of Hollywood – it was on one of those sidewalks one day when a skinny kid named Jim Little stepped on her jacks and she stole his heart away.

Darlene and family moved to the San Fernando Valley in 1946, and she graduated from San Fernando High School in 1949, then married the love of her life and had two children, Michael and Melanie. Michael married Michele in 1978 and Melanie married Jerry in 1981; Melanie and Jerry had Lisa in 1984, and Michael and Michele created their family via adoption – Greg (born in 1986) and Sarah (born in 1989). Darlene loved her grandchildren dearly, and the icing on the cake came along in March 2013, when Lisa and her husband Pat became parents to twin boys, Ethan and Jonah. After being diagnosed with a serious lung disease, Darlene often said she hoped she would live to see a great grandchild, and she got a two-for-one deal!

Darlene loved Frank Sinatra music, the soundtrack from South Pacific, good wine, good friends and, most of all, her family. She was ‘Auntie Dar” to her nieces, Lynette, Cassie and Kim, and many others, and kept tabs on all the extended family members across the country. If you needed to know anything about anybody in the family, she was your “go to” person – she was truly the matriarch of the family.

Darlene was preceded in death by her parents and brother, and will be sorely missed by her husband of 64 years, her children, grandchildren and great-grandchildren, and countless others who loved her.

A service in celebration of her life will be held on Saturday, December 28 at 1:00 p.m. at O’Connor Mortuary, Laguna Hills, California.