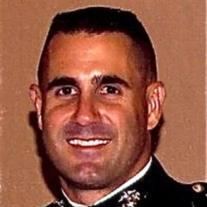 Prior to attending the Harvard Business School from which he received his MBA, he joined the Marines graduating from Officer Candidates School (OCS), The Basic School (TBS) with honors, the Marine Infantry Officer Course (IOC) and the US Army Ranger School where he was awarded the “Tex” Turner Motivation Award.

He was a devoted Marine Corps Officer serving four years on active duty (1996-2000) as a Rifle, Weapons, and 81 mm Mortar Platoon Commander with 2nd Battalion 5th Marines. After leaving active service, Dann Jr. volunteered as a reservist. He was promoted to the rank of Major, and in 2008 he deployed in support of Operation Iraqi Freedom as Company Commander, Golf Company, 2nd Battalion, 23rd Marines. His personal decorations include the Navy and Marine Corps Commendation Medal and he was twice awarded the Navy and Marine Corps Achievement Medal.

He was an unbelievable man, husband, father, son, brother, uncle and friend. He lived his life with honor, compassion, integrity and selflessness. He was devoted to his family, his friends and his Marines.