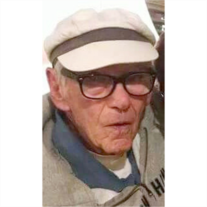 He is survived by his son Martin; his granddaughter Jennifer Bieger and her husband Jim; and son-in-law Jim Shaffer. He was predeceased in death by his wife Joyce, and his daughter Marian Shaffer.

Dan was a successful insurance executive with TransAmerica. He was born in Brooklyn, NY and came from a hard working Italian family. Dan knew several languages, including Italian, German, French, Spanish and a little Yiddish from his Brooklyn days. He was an accomplished musician and played in the Marine Corp band. Dan was active to the end, driving himself to the gym, nearly every day. His buddies considered him the Mayor. He was vigorous, enjoying golfing, bowling, really anything that got him out with people. He loved talking to everyone and they would warm up to him quickly. Everybody was a friend and he went out of his way to help others. His stories were awesome, and he was lucky enough to travel the world with his loving wife Jay, throughout his long working career.

He was so loved by all and we would like to invite his friends to the viewing, and to celebrate his life at O’Connor Mortuary on Sat., July 29th from 6 to 8pm. Located at: 25301 Alicia Parkway, Laguna Hills, CA 92653