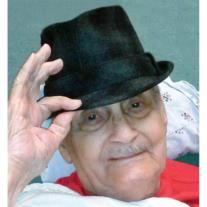 Dan Lavoie, a gentle gracious man with a warm sincere smile, he made everyone laugh out loudly on all occasions as he told us about his life, which I might add, he could recall with great ease and clarity.

Danny was a well read articulate man, as many people have commented, he was an interesting man to listen and talk to, someone who could understand and appreciate your personal point of view.

Danny liked to read, indeed it was a favorite pastime for him of which he read many books and newspapers from which he gained much pleasure.

Danny was always a happy contented man he never wanted much out of life, just simple quiet pleasures, sharing his life with his beloved Gladys and his children and grandchildren.

Someone we have all had the great privilege of knowing.

‘We must die we know’ said a character in Shakespeare ’tis but the time and drawing days out that men stand upon.’

Danny died in the early evening of November 20th 2014 at 6:28 pm, I know he will be greatly missed by everyone who knew and loved him.

In lieu of flowers, please consider a donation to the Prostate Cancer Foundation, www.pcf.org.