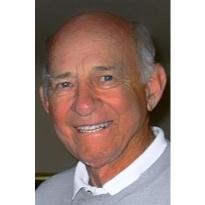 Daniel David Gaitley, 86, was born on January 8, 1925 in Oelwein, Iowa to Thomas Gaitley and Edna Hempseed, and passed away April 4, 2011 in Laguna Hills, California.

Dan was raised in Oelwein with his sisters Marlys and Pat, his brother Gordon, and ‘Kat,’ the family cat. After graduating from Sacred Heart High School, Dan joined the Navy in 1942 and served as a Navy Radioman aboard the SS James Iredell, which was the first ship sunk on D-Day at Omaha Beach as part of Operation Mulberry. After the invasion, he was reassigned to a base in the state of Washington in preparation for service in the Pacific – but the Japanese heard he was coming and they surrendered.

Following the war, Dan attended law school at the University of Detroit while concurrently working a number of different jobs, including locomotive repairman, lunch truck driver, Tiger Stadium hawker, soda jerk and apparently an unknown capacity in the circus. After receiving his law degree, Dan began working as an attorney for Chrysler Corporation, a fulfilling career that lasted 50 years.

Dan’s life was filled with adventure, from being held at gunpoint in Colombia to marking the start of the new millennium by playing golf at the stroke of midnight. But his richest experience was his loving commitment to Gloria Dani, whom he married on July 18, 1953. They thrived together for the next 58 years 505, 897 hours, enjoying a life filled with many loving family and friends.

Dan is survived by his wife Gloria, as well as his daughter Jane, sons Dave, Mike, Steve and Tom, and 8 grandchildren: all of whom will miss his joy for life, dedication to family and sense of humor.

Dan will be laid to rest with military honors on Friday, May 13, 2011 at 2:30pm at the Great Lakes National Cemetery in Holly, Michigan. A Memorial Service will take place Saturday, May 14, 2011 at 10am at St. Margaret of Scotland Catholic Church in St. Clair Shores, Michigan. Memorial donations may be made to St. Margaret of Scotland or to the Macomb County Rotating Emergency Shelter Team MCREST.