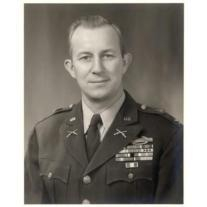 Dallas A. Pilliod age 90, died February 8, 2012 due to natural causes in Mission Viejo, Ca. He was born March 10, 1921 in Akron, Ohio to the late Charles and Julia Pilliod. He attended Cuyahoga Falls High School where he met the love of his life Grace L. Whittaker. They were happily married for 62 years.

Dallas joined the Army in 1939 and quickly became a Staff Sergeant. He was sent to Officers Candidate School in 1942 and was commissioned a Second Lieutenant. He served in World War II with the 81st Infantry Division in the Philippines and was promoted to Lt. Colonel during that time at the age of 23. He still remains the second youngest Lt. Colonel in the history of the Army preceded only by Lt. Colonel George Armstrong Custer. He also served in the Korean War and during the Viet Nam War. His numerous decorations include the Silver Star, Bronze Star, Legion of Merit, Army Commendation Medal (with 2 oak leaf clusters), American Campaign Medal, A-P Campaign Medal, Army Occupation Medal, Philippine Liberation Medal, Korean Service Medal, WW II Victory Medal, National Defense Service Medal (with 2 oak leaf clusters), United Nations Service Medal, Combat Ribbon (with oak leaf cluster) and The Combat Infantry Man’s Badge with one star. He also received numerous foreign awards.

Dallas received his BS degree from the University of Maryland and his MS from George Washington University. He worked for TRW for 15 years in Redondo Beach, Ca. until his retirement. Dallas was an avid scratch golfer and often played Los Verdes Golf Course.

Services will be at Arlington National Cemetery in the near future.

6 responses to Dallas A. Pilliod