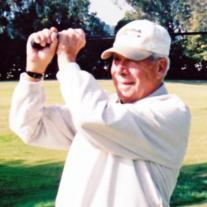 Dale Seymour, age 84, passed away peacefully at home July 22, 2012, with family by his side in Laguna Woods, California.

He was born March 28, 1928 to loving Donald and Blanche Seymour. His childhood was spent in his hometown Anoka, MN. Dale served four years in the U.S. Maritime Service and the U.S. Army during and after WWII. He met the love of his life, Norma, and married in 1953 in California. He dedicated his life to their growing family while furthering his education and employment in the Industrial Hardware industry.

He enjoyed playing golf as much as the friends that surrounded the game.

His loving wife Norma, youngest brother Jim, four sons, one daughter, twelve grandchildren, their spouses, and two great-grandchildren survive Dale. His brother Wayne preceded him in death. Dale will be missed by all whose lives he touched.