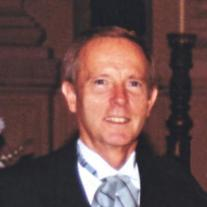 Surrounded by his family, Dale Arthur Herbst was called to be with his Lord and Savior on September 22, 2011. Born in Joliet, Illinois on October 23, 1939, Dale graduated from Benedictine University with a major in physics. Following graduation, he went to work for Argonne National Laboratory, one of the federal government’s oldest and largest national laboratories for science and engineering research. Dale also worked for the Department of Energy and at the Hanford Nuclear Site in Richland, WA before retiring from Southern California Edison, where he served as Manager of Site Quality Assurance at the San Onofre Nuclear Generating Station in San Clemente, CA. He was a 29-year resident of Mission Viejo, CA.

Before his 12-year struggle with Parkinson’s disease, Dale enjoyed coaching his sons’ sports teams, family camping trips, golfing, working on classic cars (including his 1929 Model ‘A’ Ford), woodworking and constructing balsa wood airplanes. His joy in later life was his four granddaughters. He is remembered as a loving husband, wonderful father and beloved grandfather. Dale was fair and kind to everyone he met, and was a devoted Catholic.

He is survived by his wife of 46 years, Jean; his two sons, David of Los Angeles and his wife Nathalie and their children Katherine, Margaret and Elizabeth; and Michael of Mission Viejo and his wife Cara and their daughter Sara. Dale is also survived by his sister, Lynn Cassidy and her husband Chuck of Pickerel, Wisconsin and his 99-year old aunt, Loretta Donnelly of San Diego, CA.

Dale’s Funeral Mass of Christian Burial will be celebrated on Friday, September 30, 2011, 10:30 am, at St. Kilian Catholic Church located at 26872 Estanciero Drive in Mission Viejo. A reception will immediately follow. Interment will be private at Ascension Cemetery in Lake Forest, CA.

In lieu of flowers, donations can be made to Benedictine University (www.ben.edu) or The Cradle (www.cradle.org) .