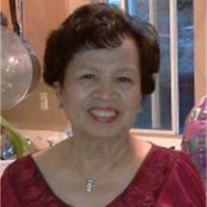 Cresencia Lopez Castulo, 85, passed away on Saturday December 9, 2017 at her place of residence in Trabuco Canyon, California. Born in 1932 in San Quintin, Pangasinan, Philippines, Cresencia was one of the first in her family to attend college, and she studied to become a teacher. Cresencia attended Luna College, where she met her husband, Severo Castulo. Cresencia started teaching elementary school in the mid-1960s at Murphy Elementary School in Quezon City, Manila, Philippines where she taught for over 20 years until her retirement in 1980s. Cresencia and Severo were married for 50 years until his death in 2007.

A devoted mother, grandmother, and great grandmother, she is survived by her four children, ten grandchildren, and two great-grandchildren. Cresencia will be remembered for her generosity, kind spirit, and devotion to her family. The memorial will be held on Monday, December 18 from 4 to 6 at O’Connor Mortuary in Laguna Hills, California. The funeral mass is Tuesday, December 19 from 10 to 11 at San Francisco Solano Catholic Church, Rancho Santa Margarita, California.