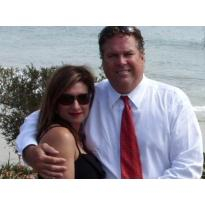 Craig Carrington Garrett, 48, passed away suddenly on Sunday, February 15, 2009 of cardiac arrest at his home in San Clemente, California. He was born July 26, 1960 in North Hollywood, California and lived most of his early life in Massachusetts and later in Southern California. He is survived and deeply loved by his wife Sherry Lynn Garrett, his only son Chase Carrington Garrett, age 6, his mother and step-dad Suzanne Goodwin and George E. Slye of Naples, Florida, his brother Curtis Charles Garrett Vicki and his three nephews, Chad, Cole and Connor Garrett of Ladera Ranch, California.

Craig was an avid sportsman all of his life beginning as an All-Star every year he played in Little Leaque Baseball. His shelves were full of trophies and awards. His happiest of times were spent playing tennis, boating, water skiing, deep sea fishing, snow skiing, and of course, ‘on the course’ golfing. The only thing that made these times better for him was when he was with a good friend or a close family member. He was an outstanding adult softball player who participated for years in many local competitive leagues. He was just in his element being outdoors, and with a ball in his hand. He even knew how to make a whiffle-ball game with his son and nephews seem like the World Series.

His lifetime love of sports created his passionate enthusiasm for the Boston Red Sox and the New England Patriots. If you weren’t sitting beside him while he sat in his beloved brown leather recliner watching one of his favorite teams, then you were somewhere else being bombarded by his phone calls whenever an exciting play was made.

Craig is watching and cheering from above.

He Will Be Missed by Family and Friends

May He Rest In Peace

Funeral services will be held on Wednesday, February 25, in the Chapel at O’Connor Mortuary in Laguna Hills, California at 1:00 p.m.

A private Burial at Sea will take place on Friday, February 27, at Emerald Bay, Laguna Beach, California at 11:00 a.m.