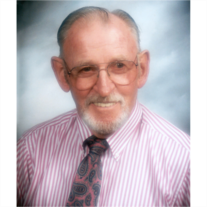 Cornelius “Neil” Duggan of San Clemente, CA, passed away on March 22, 2016, in the presence of his wife and daughter. He was born the 11th child of Irish immigrants, John and Mary Duggan, on June 1, 1922, in Flushing, NY.

Neil served his country honorably during WWII in the Army Signal Corp. In 2004, he returned to Normandy, France, for the 60th anniversary of D-Day and was honored for his participation in the Normandy Invasion on Omaha Beach.

Neil worked for AT&T (Pacific Telephone) for 41 years and missed only 5 days of work. After retiring, he began his own handyman business. Neil enjoyed golfing with his buddies, square dancing, RVing and attending jazz festivals with his wife.

Neil is survived by his wife of nearly 48 years, Sue Duggan; his daughter, Donna (Bruce) Lothringer; 5 grandchildren and 9 great-grandchildren. He is also survived by nephew, Bob (Linda) Duggan of San Diego and numerous adoring nieces and nephews around the world. The family wishes to thank Marcelo Avila for his devoted, personal care of Neil for the past 7 years, Capistrano Beach Care Center and Hospice of the West.

A funeral Mass will be held at 11:30 a.m. on Monday, April 11, at St. Kilian’s Catholic Church in Mission Viejo. A private burial will take place at Riverside Cemetery.