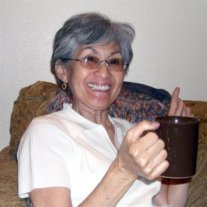 Clara Fujita Balaam, 79, of Laguna Niguel passed away peacefully early Monday morning on November 25, 2013 from respiratory failure. Fu, as she was called by many, was born in Pahala, Hawaii on July 2, 1934. She was the youngest of 5 children. Born and raised on the Big Island of Hawaii she lived in California, Texas, Washington, and finally back to Laguna Niguel, California.

She was a wonderful wife, mother, grandmother and even a US Marine.

Growing up on the Big Island, she was the daughter of a carpenter. She grew up snacking on sugar cane, hitch hiking to the Black Sand Beach, and generally being a true islander. When she was 11, she won the ‘National Girl Scout and Red Cross Honorable Mention Award for Life Saving’ for saving a 6 year boy from drowning. She finished high school and attended the University of Hawaii for a year. Finally, she left for the mainland and she served in the US Marines from 1953 to 1956 and operated the Link Flight Trainers at the El Toro Marine base. (We only found this out after spying a cute picture of a Marine in her mother’s house.) A few years later she met Ed Balaam. They eloped to Las Vegas, and were happily married for 25 years. Her primary occupation as a homemaker involved numerous trips around town carting her children to activities, 25 years of lunch packing and continuous laundry. As a loving mother and spouse, you couldn’t ask for a more clear thinking, considerate and generous person. After Ed passed away in 1987, she continued living in Renton, Washington and worked as an office assistant for a dentist. Finally in 2005, she moved to California to reside with her daughter Leilani. She spoiled her grandchildren with love and lessons in hygiene and manners. She was always a cheerful person even in the face of breast cancer in 2006 and pneumonia in 2012. After another recent bout of pneumonia her small frame was over whelmed and we expect she is now with dad in heaven smiling down at us.

Clara is survived by her sisters, Nancy and Jean, and by her daughters, Leilani and Roberta, and 4 grandchildren: James, Robert, Nicole and Nathan. And she wouldn’t be happy unless we mentioned her extended cat family: Atlas,Tiger, Ebony, and Bowtie who also miss her dearly.

She will be greatly missed by all those who knew her.

Her favorite charitable organizations were:
VA: The Veterans Association
ASPCA: American Society for the Prevention of Cruelty to Animals