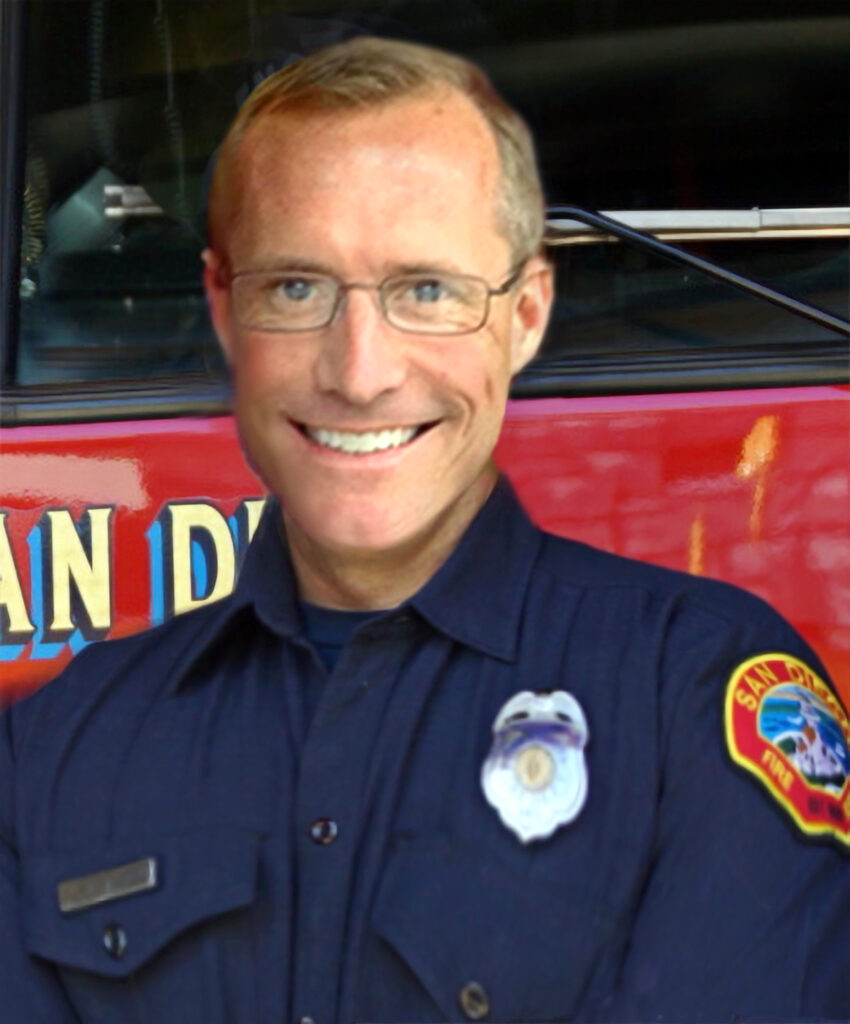 Chet Bertell’s long career as a firefighter began as the result of a fire – one that he started himself. As a boy he had a fascination with matches, remembered Kristin, the oldest of his three sisters. One day he managed to set fire to a sizable part of the family’s lawn. His parents marched him down to the local fire station for a lecture on fire safety – and he promptly joined the junior firefighters.

That was the inspiration for Chet to join the San Diego Fire-Rescue Department in 1995, and to spend his professional life in the protection and support of others, until he passed away unexpectedly on December 13, 2022, less than a month before his 50th birthday.

Chet’s life was devoted to selfless service. Whether as protector of his community as a firefighter or a naval intelligence officer, or as a devoted brother and friend hosting weekly dinners or doting on his nieces and nephews, “if you were in Chet’s circle, it was a very safe place to be,” remembered his older sister Sheri.

Chet Richard Bertell was born in Mission Viejo, California on January 9, 1973, the third of four children and the only son of the late Richard “Dick” Bertell and Sue Lawton Bertell. He graduated from Mission Viejo High School in 1991 – but not before demonstrating the protective nature he would show in his professional life.

One year ahead of his youngest sister, Kenna, Chet was determined to shield her from the attentions of over-zealous boys. “He would tell my mother which boys had a crush on me and who my mother should let me see,” she recalled. Meanwhile, she said, her girlfriends all had a crush on the smart, tall and athletic Chet who “kinda checked the box for every mother’s dream boyfriend for their daughter.”

After getting his degree in Political Science and Government from UCLA in 1995, Chet became a paramedic with San Diego Fire-Rescue, the beginning of a career with the department that would last a quarter century. Over the course of his tenure, he became a member of the bomb squad and took on a leadership role in the firefighter’s union. For much of his time, he was part of the company at the Airport Station at San Diego International Airport, where he was beloved not only for his dedication but also for his skill as a chef – “few of his team would want to cook on his shift because he loved doing it and it was great food,” Kristin said.

Chet was single, and so he would volunteer to work Christmas Eve and Christmas Day shifts so his colleagues would be able to spend time with their families. “He would say, ‘I don’t have kids, so why shouldn’t I volunteer’,” remembered Sheri, whose first memory is being perched on a floor-standing ashtray at the hospital looking in the nursey window at her newborn brother. “He had such a kind heart. He always put others in front of himself.”

Yet the excitement of being a firefighter and even a member of the bomb squad wasn’t quite enough excitement for Chet, Kenna remembered. In 2010, he also joined the U.S Navy, serving six consecutive active-duty deployments in support of U.S. Central Command and U.S. Special Operations Command mission priorities: twice to Afghanistan, as well as to Qatar, Bahrain, Kuwait, and Djibouti. One officer told a sister that “few reservists complete even a fraction of that amount over that time period, let alone six, and noted that all of his assignment selections were in especially high-risk areas of the world.” As a Lieutenant Commander in Naval Intelligence, he was awarded the Navy Commendation medal and three Navy Achievement Awards – and had been scheduled to go on another tour as a reservist at the time of his death.

“We weren’t stoked about him going to a war zone,” said Kenna, “but we were proud of him. He would always say that he wasn’t serving just to protect his country, but to protect us, his sisters and his family.”

But perhaps even more than his role as a protector, Chet relished being a host to his family and friends. Whenever he was home, Sunday nights were Family Dinner nights, and family was defined as relations, friends, and almost anyone he knew. Everyone was welcome at his condo in downtown San Diego – and, if they were lucky, they would show up when he was creating some of his legendary spicy Mexican cuisine.

“There was no better place for Chet Bertell to be than hosting people and making them dinner,” Kenna said. “No matter where you were, he would have a kitchen towel over his shoulder, and you would feel part of his family.”

He was so enamored of cooking that he brought tomato seeds to a most unlikely place: on his deployment to Afghanistan. Despite the challenges of finding water for them, he grew tomatoes and other vegetables so that he could make his favorite dishes, including salsa, for those serving alongside him. It was a trait he passed along to his sister Sheri: When she found it difficult to buy salsa verde in her adopted home of Monaco, he encouraged her to plant tomatillos on her deck and make her own.

Chet was a superb and graceful athlete, taking after his father, who played professional baseball as a catcher for the Chicago Cubs, San Francisco Giants and San Diego Padres over the course of several seasons in the 1960s. Chet himself was a lifelong fan of the Cubs and Padres, along with UCLA football. Kenna recalled a vacation with her husband, father and brother that involved a golf challenge including a prize for the longest drive. Chet, who had not picked up a club in some six years, casually hit a dead straight ball 20 yards farther than anyone else.

While he had no children of his own, “Uncle Chetter” as he was known was devoted to four nieces and nephews. He used his financial acumen to set up and manage a bank account for each of them from birth so they would be able to buy themselves their own car when they reached age 21. He also knew how to win a kid’s heart, like the time he pulled up to a nephew’s birthday party in a fire truck, dressed in full firefighting gear.

Chet was intensely interested in learning, a voracious reader who loved debating and music. He earned an MPA in Organizational Leadership from National University in 2012. He had plans to go to law school upon his retirement from San Diego Fire-Rescue, which was to have taken place on his 50th birthday, as well as to learn to fly a helicopter.

“You never want to get into any sort of debate with him, because you’d lose,” said Sheri. “But he was very open minded. If you had a strong opinion, he’d listen to you. He’d probably get you to change your mind, but sometimes he changed his, too.”

Chet was a dedicated blood donor for the San Diego Blood Bank and other community blood drives, contributing for 26 consecutive years. He also supported charitable causes including City of Hope, Susan G. Komen and the Lupus Foundation of America.

A memorial celebration of life will be held late afternoon on Monday, January 9, 2023, beginning with the arrival of a formal “last ride” procession from the San Diego Fire-Rescue Department to The Rock Church in Point Loma, California (Liberty Station). For details on both the public memorial and the reception for family and friends, please visit this memorial page on the O’Connor Mortuary website again for updated information. In lieu of flowers the family asks you to consider a gift in honor of Chet Bertell to the San Diego Fire-Rescue Foundation.

“He was an amazing brother,” Kristin remembered. “The only thing he loved more than his firefighter community was his family.”

Memorial Service:
Rock Church
2277 Rosecrans Street
San Diego, CA 92106
Time: 4:30 pm
Chet’s service can be viewed at the link below for those who cannot attend:
https://www.sdrock.com/inmemoriam