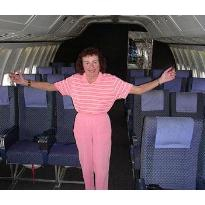 Charlotte Annette Young Baerst of Laguna Woods, CA died early Tuesday morning, June 29th, 2010 at the Saddleback Memorial Hospital. She was 83 years young when her spirit decided to reside in the afterlife.

Charlotte was born on September 2nd, 1926 in Aquebogue, NY to Harold E. and Elizabeth F. Young. Charlotte grew up on a potato farm but Charlotte dreamed of a more cosmopolitan lifestyle beyond the farm. She graduated with the Riverhead High School Class of 1944 and excelled in French language studies. After graduation, her hard working parents sent her to the all-women’s Russell Sage College in Troy, NY where she continued her studies of the French language and earned a Bachelor of Arts degree in 1948. With her language skills in hand, she landed a job working for the newly formed United Nations in the very cosmopolitan New York City.

After a couple of years in New York City, she decided that she needed to expand her horizons and accepted a civil service job with the U.S. Army and moved to Salzburg, Austria. Charlotte was now in her cosmopolitan element with this new job and she took advantage by traveling all over Europe to meet new people, learn new languages, and view the sights. After a couple of years in Austria she was transferred to Turkey where she continued her love of travel and eventually met her future husband, Louis R. Baerst, a fellow New Yorker who was a defense contractor working in Turkey.

Charlotte and Lou were married in December 1956 in Turkey and then shortly afterwards made their way back to New York City where Charlotte continued working and Lou went to graduate school. In 1958, Charlotte and Lou moved west to settle in Anaheim, California where they bought a house and raised two boys, Steve and Andy. This started the more domestic phase of Charlotte’s life as she was busy raising children and was very involved in their school activities to include many years as a devoted ‘band mom’ during their high school years. Charlotte also found time to work as an administrator for several aerospace companies, obtain her teaching credentials, and work towards a Master’s degree. She always welcomed all the neighborhood kids in her home and was affectionately called ‘Mrs. Tough’ for all the nonsense she put up with over the years. After the kids left the house, Charlotte continued her lifelong learning quest and became a stenographer and worked as a court reporter for several years.

In 1992, Charlotte lost her husband of 36 years but she continued to press on and enjoy her passions of learning and traveling. In addition to her French studies, she was fluent in Spanish, German, and also learned some Turkish, Vietnamese and Farsi along the way. She eagerly traveled all over the United States to visit family and friends and she also ventured to many areas around the world including China, Russia, Europe, Mexico, and Southeast Asia. After living in the same house for over 40 years, she reluctantly moved to the ‘retirement’ community of Leisure World now Laguna Woods where she became even more active than ever. She took up golf when she was 60 and even had a hole-in-one, played bridge, exercised daily, visited museums and attended cultural events at a dizzying pace. She also continued her volunteer work by regularly supporting a local charity, Tony’s Treehouse, as an interpreter and helper. She continued with her passion for learning into her 80s by attending local college classes. Even in her final days when in the hospital and very ill, she had her notepad at the ready to take copious notes on what the doctors were saying and to keep them honest.

Charlotte taught us all that we should never stop learning, challenging ourselves, or embarking on new adventures.