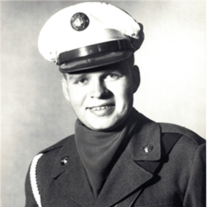 On November 24, 2015, Charles, 83, entered eternal life with our Lord. He passed away at home with his family by his side following a valiantly fought battle with lung cancer. He is survived by Joan, his loving wife of 59 years, his sister, Rose, his four daughters, Carol, Christine, Cathryn, and Beth, his sons in-law Dennis, Jay, and Michael, his nine grandchildren, Elyse, Lauren, Garrett, Grant, Matthew, Gregory, Mitchell, Chaz, and Gillian and his great-granddaughter, Lila.

Chuck was born on the south side of Chicago on August 7, 1932 to Lithuanian parents, Kazimieras and Domincele Kaminskas. He was called Vyto by all who knew him and, although he came from humble beginnings with few advantages, it became clear early on that he had an unwavering drive to create his own opportunities. At the age of 12, he began working summers on a local sausage truck helping deliver meat to the city’s many butcher shops. While he was in high school, he worked as a bellhop at a major hotel. By the time he graduated from Kelly High School in 1950, he had already been working for 6 years.

Shortly after he graduated high school, Chuck’s father passed away, leaving him as the sole provider for the family. During this period, Chuck pursued a number of career opportunities including, insurance and automobile sales.

In the fall of 1951, Chuck attended a dance held at the local American Legion Hall where he was a member of the Drum and Bugle Corp. A lovely college girl named Joan Catalan caught his eye and he asked her to dance. She accepted and he was smitten. Dating soon turned to love and in the fall of 1953, a proposal of marriage.

It would turn out to be a long engagement, however, because in December of 1953, Chuck was inducted into the Armed Forces and served as an MP overseas during the Korean War. Although he was honored to serve his country, Chuck felt that the military atmosphere of repetition and obedience stifled his desire to learn, work, and innovate in the “real world”. He was also eager to return home to his true love, Joan.

On his return to the states in 1955, Chuck’s entrepreneurial spirit really began to thrive. He took his military earnings and cashed in an insurance policy to invest in the first of many business ventures, Foremost Liquors. Chuck devoted time, energy, and ingenuity into this business and it was a success. In fact, it was the first of many successful business ventures Chuck would eventually spearhead in the liquor, restaurant, real estate, and asset management industries spanning the states of Illinois, California, and Nevada.

On April 7, 1956, Chuck married Joan, the love of his life, in Chicago, Illinois. As his business grew, so did Chuck’s little family and soon Carol and Christine were born. In 1959, a new business opportunity led him to move the family cross-country to California where Cathryn and Beth rounded out the clan. He was an exceptionally devoted family man and whether at home or on the road, Chuck always made life an adventure.

One of the main tenets by which Chuck lived was that “there is no success without hard work and sacrifice”. Whereas most people find work to be a chore, Chuck always referred to any job and work in general as an “opportunity”. He attributed the bulk of his success to the life lessons he’d learned through experience. From his meager beginnings and the necessity to work to support himself and his family at such a young age, to the great successes he achieved in business and at home, he was a true innovator with a steadfast entrepreneurial spirit.

Work was Chuck’s driving force.. he LOVED it! He was passionate about the art of the deal, the negotiation, and the discovery of a new or better way to achieve a goal. Long after most of his friends had retired, Chuck was still enthusiastically maintaining his current corporations, while continuing to pursue the next business opportunity. At the beginning of his life, work was not a choice, it was necessary for survival. During his life’s journey, however, Chuck’s decades of experience only strengthened his love of the game and work truly became his life’s blood. His dedication was so strong that he even met with a colleague to take care of some business the day before he passed away.

The two things Chuck valued most in life were his family and the many close and rewarding friendships he forged throughout his life. Chuck would always say, “Family is EVERYTHING!” He was a devoted husband, father, grandfather, and friend. He was deeply loved by family and friends and his spirit will live on forever in our hearts.