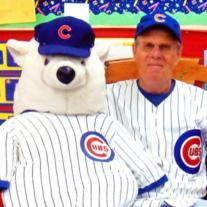 Chuck Kalberg was born in Chicago, Illinois on October 26, 1946 and died peacefully in his home on August 6, 2012. He is survived by his wife of almost 44 years, Karen, and daughter Marcy Holder, son, Chuck Kalberg, son-in-law, Kevin Holder, daughter-in-law, Melissa Kalberg, and grandchildren, Skylar Holder, Christian Kalberg and Sierra Holder.

Chuck started working at Montgomery Ward in 1963 assembling bikes during the Christmas holidays. He did such a great job they hired him permanently. This was the beginning of a very successful 30-year career, which ended abruptly as a result of cancer. During Chuck’s 30-year career he worked his way up to the position of store manager. His staff adored him and was very sad to see him go out on disability.

Chuck started volunteering at Valencia Elementary School when his first two grandchildren started kindergarten. It was during this time that Chuck discovered he had a God given gift, which was motivating and teaching children math and reading. The teachers loved him for all the positive influence he had in the classroom. During this time at Valencia, Chuck earned the nickname of “GP’ (for Grandpa given by one of the teachers). He has left an everlasting legacy with the students and staff at Valencia and will truly be missed.

One of the activities Chuck loved to do was running, particularly organized running events locally as well as in other states. One of his favorite runs was the Bloomsday 12K run in Spokane, Washington. Each time he ran this race he always noticed a group of Nuns cheering the runners on as they passed. At the time when Chuck was diagnosed with a life threatening form of cancer, he asked God that if he was allowed to live he would support the convent in which the Nuns represented for the rest of his life. Through God’s will and Chuck’s strong desire to survive he was able to honor his promise to God. The next time Chuck was able to run Bloomsday, he handed a check in an envelope to one of the Nuns on the side of the road. Approximately a week later, a letter arrived in the mail thanking us for the donation. This was the beginning of a lifelong relationship between the convent and us. Chuck kept his commitment until he went to be with Jesus. In his honor, his wife Karen will continue to support the convent. Ironically enough, August 6th, the day Chuck passed, is the “Feast of the Transfiguration” in the Catholic religion.

Chuck was an amazing man, always taking care of everyone before himself. His family was very important to him and he always wanted to make sure we were all taken care of if anything happened to him. There are no words to express how he will be missed not only by his family but everyone he touched.

Because of Chuck’s passion for supporting the Nun’s convent, a cash donation in lieu of flowers would be greatly appreciated.