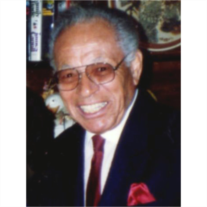 Charles H. Clarke passed away on February 20 after a brief illness. He was 91 years old and is survived by many loved ones, notably, his partner of 35 years Patricia Young and also her daughters Christine and Tracy, his sister Aileen and his nieces, nephews, granddaughter and many, many friends.

Charles grew up in Brooklyn NY, served in the Army Corp of Engineers and was instrumental in building airstrips in the Pacific during WWII. He was an agent for the William Morris Agency where he worked and partied with Sammy Davis Jr. and Frank Sinatra. After relocating to the west coast, he worked in Aerospace at the Garret Corp. until retirement. Following retirement he expanded his wood-working and many have reaped the rewards of his craftsmanship.

Charles loved people and parties. Never at a loss for words, he was the epitome of class and in his element entertaining. He had a particular interest in looking his best and captured attention when entering a room. He and his beloved Pat, traveled the world where they met many friends. A generous and warm man, Charles had a fair sense about him. He was precise and methodical in his craft, and warm and gentle in his life. He loved well and lived well.