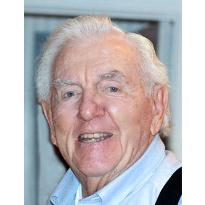 Charles F. Dodson, a resident of Falmouth, Massachusetts, devoted husband, father and grandfather, passed peacefully with his family by his side in Mission Hospital, Mission Viejo, California on August 11th.

Born in McMinnville, Tennessee, son of Venus and Mariah Dodson he was raised in Tennessee. He attended Cumberland University and the University of North Carolina. He enlisted in the Navy in 1941. While serving in the North Atlantic in 1942, he survived the sinking of the USS Pollux off the coast of Newfoundland. Thereafter, he was accepted into the Naval Aviation Cadet program, received his wings and commission in November 1943, and served in the South Pacific area. After his discharge in the Naval Air Corp in 1945, Mr. Dodson remained in the active Naval Reserve until 1964.

Following his Active Military service, he earned a Juris Doctor Degree from Northeastern University and helped establish the law firm of Wolfson, Dodson, Keenen and Cotton. He actively practiced Law with this firm in Worcester, MA until 1998.

Since 2003, after forming the Hermann Foundation, a well-known charitable group that has provided significant contributions to public charities, Attorney Dodson served as president and also on the board of directors.

An avid golfer and traveler, he was a member of the Woods Hole, MA Golf Club and the Bella Colina Golf Club in San Clemente, California. He vacationed in California and Spain.

Private services were held in California and a celebration of Charles’ life will be held at a later date.