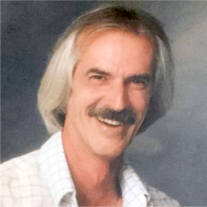 Charles, who resided in Lake Forest, passed way peacefully and is now with Our Lord and Savior. He was surrounded by family. He is survived by his wife of 33 years Mary, their son Ben and daughter Dori.

Originally from New Bern, NC he traveled to Hawaii and then to California during his youth. He always said ‘when your father is stationed in Hawaii and you were a non-swimmer’ (as he was) ‘you either played baseball or bowled.’ He played Little League baseball for a couple of years; but found that bowling was more of his calling. He was an avid bowler since his teenage years. In fact he would later be a bartender at Forest Lanes bowling center – which is where he met his wife. They shared many years of league bowling, especially the Vegas leagues. They continued to enjoy their trips to Las Vegas even once the kids arrived; and found many family friendly things to do there before Vegas started doing it too! Charlie had a variety of jobs though the years … Auto mechanic, US Postal Carrier, Bartender, Management Assistant and Manager. He was also very proud of his time in the US Navy and Naval Reserves during the Vietnam War time. Charlie’s love of baseball came full circle when he was blessed with a son that happened to love playing all sports! Charlie was at the baseball fields as often as he could helping out whenever he could. He was fortunate to be coach on many of his son’s teams. Later on when his son became interested in hockey, he learned about that sport too so that he could cheer him on! Once his daughter came along, he was a little bit more mellow and loved spending time with her as well. They shared the joys of making the weekend projects at Home Depot and Lowe’s. She was also his ‘helper’ when he was keeping score at the baseball games. She was his ‘co-cheerleader’ from the bench at the games! Charlie was so proud of his daughter making the Color Guard team at ETHS. His health started failing at the beginning of the school year and was saddened that he was only able to see a couple performances in person. Family and friends shared video copies of the performances with him. We are comforted that he will be watching from above now. He loved his family and always said spending time with his family is his greatest joy!

Services to celebrate Charlie’s life will be held on Monday, April 25th at 7 pm in the chapel of O’Connor Mortuary in Laguna Hills. Interment at Riverside National Cemetery will be Tuesday, April 26th at 11 am. Please visit Charlie’s memorial page at www.oconnormortuary.com to sign and leave your remembrance on his Tribute Wall. In lieu of flowers, please consider a donation be made in his name to El Toro High School Color Guard at https://gofundme.com/88z87xhw.