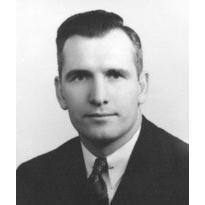 Charles Bernard Charley Brown, 93, former publisher of the PALISADIAN-POST, Pacific Palisades, California, and the CHISHOLM MN TRIBUNE-HERALD, passed away Thursday, May 28, at his daughter’s home in Irvine, California.

Funeral services are scheduled for June 8th at 9:00am at St. Nicholas Catholic Church in Lake Forest. He will be laid to rest following the Mass of Christian Burial at Holy Cross Cemetery in Culver City, California. He will receive military honors with US Army color guard at his interment.

He was preceded in death by his beloved wife of 59 _ years Genevieve in December 2003 and four children: Duane, Bruce, Bonnie and Teresa; two brothers: Walter and twin William Bill March 2005; and one granddaughter: Crystal Lynn Brown, 18, who died in a tragic car accident in August 2004.

Receiving degrees in Journalism from the University of Minnesota in 1938, the twin brothers returned home to become news editors of the Chisholm newspaper, taking over as publishers after the sudden death of their father in 1940.

With the outbreak of World War II, twins Charley and Bill tried to enlist in the Navy’s V-7 program. Bill was accepted, but Charley was denied due to an old eye injury and later was deferred in the draft for the same reason. He continued operation of the family newspaper alone, but when deferees became eligible for Limited Service in late 1942, he enlisted in the Army and was sent to Camp Callan near San Diego, California, for Anti-Aircraft training.

On completion of basic training he was requisitioned for duty in the Public Relations Office at Camp Callan, where he served for over a year and was a member of the Post basketball team. When transferred for Public Relations duty at Stockton Ordnance Depot, California, he volunteered for service with the Army Air Force Crash Boat branch.

Enroute to his new assignment at Biloxi, Mississippi, he furloughed in Chisholm where on his 29th birthday in June 1944 he married Genevieve Adamic, his one and only sweetheart.

With the end of the war in Europe, the Crash Boat pool was dissolved and he was reassigned to Public Relations duty at Freeman Field, Indiana, the only helicopter-training base in the country.

At his new station he was joined by his wife Genevieve, who was employed in base headquarters. Again he was a member of the Post basketball team which engaged college and other service units-in the tri-state area.

Brown made a standing application for Officer Candidate School during his early years, but quotas were practically non-existent because of his deferred entry into the service. However, upon his transfer to Public Relations duty at regional headquarters at Maxwell Air Force Base, Montgomery, Alabama, he was summoned before the OCS board and his application was approved.

Genevieve left for home in Chisholm for the birth of their first child as Charley took off for Air Force Officer Candidate School at San Antonio Texas Aviation Cadet Center. Named to the Honor Council and graduating near the top of his class, he was commissioned a Second Lieutenant in July 1944.

He was assigned to the Public Relations Office at Wright Field, Dayton, Ohio, where he was in charge of the base newspaper. He was in the contingent of officers staging an anniversary celebration of the Wright Brothers first flight and met Orville Wright, the only surviving member of the famous duo.

With the dropping of the atomic bomb on Japan and an end to the war in the Pacific, Brown received his discharge in February 1945 at Patterson Field in Ohio.

He remained in the Air Force Reserve and re-entered the service during the Korean crisis but resigned his commission following his release from duty due to family dependency. He returned to Chisholm to alone head the family newspaper.

The CHISHOLM TRIBUNE-HERALD was awarded First Place in the Weekly Division of the 1947 Better Newspaper Contests of the National Editorial Association for their special edition concurrent with the community’s Soldiers Homecoming Celebration. They also were awarded national Honorable Mentions for Best Use of Pictures in subsequent years.

Charley sold the family newspaper for their mother in 1954 and the brothers purchased the fledgling PACIFIC PALISADES POST, then in competition with the pioneer PALISADIAN.

During their 28 years in Pacific Palisades the Browns amassed a total of 169 major state and national awards in almost every newspaper category including numerous General Excellence awards and topped by the last Gold Medal awarded by the California State Fair in 1966 in competition with all newspapers in the state including the metropolitan dailies and small-town dailies.

In 1973 the Brown brothers were summoned back to the University of Minnesota by the School of Journalism and Mass Communication Alumni Association to receive Outstanding Journalism Alumnus Awards ‘for achievements exemplifying the highest traditions of the School.’

The Browns retired in 1982 after the sale of their newspaper, real estate and job printing business to the Small Newspaper Group headquartered in Kankakee, Illinois. Charley and wife Genevieve moved to Leisure World in Laguna Hills, where they enjoyed traveling, bowling, dancing and spending time with their children and grandchildren. The brothers were reunited at Freedom Village after the death of Bill’s wife Marie in 1995.

Charley got into bowling for the first time in retirement at Leisure World in Laguna Hills and at age 80 recorded a 297 game in league competition for which he was awarded a plaque and wrist watch by the American Bowling Congress for ’11 Strikes in a Row.’ His team finished second in the California Seniors State Tournament of 900 bowlers, holding down first place until the final week of the extended event.

The Brown twins were regulars on the 1932 Chisholm High School football team, which was undefeated and was crowned champions of Minnesota’s Mesabi Iron Range. At Hibbing Junior College both were named to the Northern Junior College Conference All-Star Team in 1934–Bill at an end position and Charley at center.

On full football scholarships at Union University in Jackson, Tennessee Charley played nine full football games of 60 minutes without substitution and was named to the Nashville Banner’s All-Star Team of the Week on one occasion, replacing Vanderbilt University’s All-American who was a fixture at the center position.

Opportunity arose for the twins to pursue their degrees in Journalism at the University of Minnesota by accepting jobs as boys’ workers and basketball and football coaches at Wells Memorial Settlement House in Minneapolis.

On return to Chisholm they organized and were members of the TribuneHerald Newshawks basketball team which won the city title and went on to capture top honors in the state by eliminating the Minneapolis multi-team champions in the semi-finals and Hibbing’s champions in the finals.

Bill was a forward on the 1933 Chisholm High School basketball team which finished second in the state tournament while Charley was a member of the boys’ swimming team which won both State and Northwest titles.