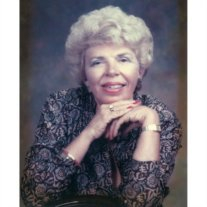 Catherine “Jan” Peverill passed away peacefully on the morning of April 1, 2013 at the age of 78. Jan is survived by her husband William LeRoy Peverill, her children William and Sandy, her grandchildren Jessalyn, Colton, McClinton, Jordan and her great-grandchildren Elliot, Hudson and Owen.

Jan was born in Ridgewood, New Jersey to Mr. and Mrs. Wayne Hungerford. After spending much of her early childhood in New Jersey, Jan’s family relocated to the west coast were she would go on to meet her future husband of 57 years on a blind date. Soon after Bill graduate from USC, the Peverill family of four relocated to San Clemente where Jan would go on to be a prominent figure in the community.

Due to Jan’s love for her community and desire to create new experiences, she would go on to start Introductions Unlimited. The business would soon grow into one of the largest welcoming services in Southern California. Jan became popular with many food critics, including Elmer Dill where she would spend the next 26 years traveling and speaking about popular Bed and Breakfasts across the United States. She would author and publish three popular Bed & Breakfasts books about her unique travel experiences.

Throughout the next 25 years, Jan would never lose sight on the beautiful town of San Clemente where she would go on to create the San Clemente Farmers Market with her daughter, Sandy Heil. Jan was a true entrepreneur creating San Clemente’s first Bridal Show and monthly Art and Craft Show. Jan received many awards including the Soroptimist Woman of Distinction in 1995 and the San Clemente Chamber of Commerce’s Business of Year in 1996.

In honor of Jan Peverill, Rick and Sandy Heil will continue to manage the weekly Farmers Market in her memory for many more years to come!