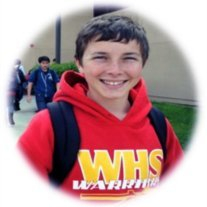 Casey Strale passed away peacefully at his Irvine, CA home on June 24, 2013 with family and friends at his side. He was the son of Chris and Traci Strale and loving older brother to Kyle Strale.

Raised in Irvine, he attended Plaza Vista School, where he was an excellent student and Alternate Captain of the school’s roller hockey team. He developed many special friendships with classmates and teachers due to his outgoing and happy-go-lucky personality.

In 2009 at the age of 12, Casey was diagnosed with an advanced stage of Adrenal Cortical Carcinoma (ACC), a rare form of cancer. During the following three and a half years he received caring treatment at Children’s Hospital involving numerous surgeries and extensive chemotherapy.

While attending Woodbridge High School he excelled academically and was involved in lacrosse and roller hockey. His classmates held him in high regard due to his magnetic personality, determination and his attitude that he could overcome any obstacle. His studies were cut short due to his illness, as he was unable to complete his Junior year.

An avid hockey ice and roller hockey player and fan, he played for many clubs and teams, most recently as a member of the Junior Ducks Midget A ice hockey team, as well as the Woodbridge High School and California Rollers roller hockey teams. While playing for the Beach City Lightning ice hockey team, he was honored with the 2011-2012 Trevor Win’E Excellence in Leadership Award, most notably for his determination and perseverance. His passion was the game of hockey, the excitement of the competition and most importantly, the camaraderie with his teammates.

Casey was a dedicated employee of the Rinks-Irvine inline hockey facility, primarily teaching young children skating and hockey skills while imparting his special affinity for the game.

He was the ambassador of the annual Give Blood Play Hockey inline hockey charity tournament, a blood donation event benefitting local hospitals and fundraising effort benefitting CHOC Children’s Hospital. As a local youth hockey player battling cancer, his journey touched many and his involvement in the tournament attracted many additional supporters.

He will be greatly missed by everyone who knew him or knew of him. He will be remembered for his freckly grin and his gentle, caring demeanor. He was a loving son and brother, caring friend and revered teammate. He was a dedicated student and athlete and displayed a maturity well beyond his years. His courageous and miraculous battle against cancer and positive attitude towards life was an inspiration to everyone.

CASEY STRALE’S CELEBRATION OF LIFE SERVICES:
We will be having an open service/celebration of life for our son Casey Strale at The Rinks- Irvine Inline, on Rink #2 next Tuesday afternoon (July 2) at 1:00 pm (1300 hours in honor of Casey’s jersey #13). We ask that kids/adults wear hockey jerseys/hockey garb, even your skates and sticks for a floor tap in his honor. If you have on a suit and tie be prepared to sit in the penalty box! Parking will be an issue, please arrive early and park at Bill Barber Community Park or Creekside High School 3387 Barranca Pkwy, Irvine, CA 92606 and walk over. There will be staff to help direct you.
The Rinks – Irvine Inline, 3150 Barranca Parkway, Irvine, CA 92606.

In lieu of flowers the family is asking that all donations be directed to your choice of the following: www.givebloodplayhockey.org, and click on the donation link and type Casey Strale for team name. Or mail checks to: CHOC Foundation, c/o GBPH 14742 Plaza Drive, 203 Tustin CA 92780. To donate to Casey’s foundation for ACC cancer research: http://www.tgenfoundation.org/netcommunity/casey