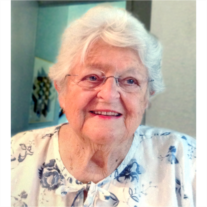 Mrs. Sue Phillips, age 85 of 2398 via Mariposa West, Laguna Woods, California died on July 15, 2017 from natural causes. Born Carol Sue Andrews on September 13, 1931 in Huntington, Indiana to George and Helen Andrews. Sue’s family lived in South Bend, Indiana until the end of World War Two when her family moved to Lake City, Iowa to join Helen Andrews’s brother, Carl Gass, in the furniture business. Sue graduated in the Class of 1949 from Lake City High School and was a very popular young lady active in the school band and vocal music group, the dramatics club, the Y-Teens Club, and the Pep club. She was also active in Student Council and was on the staff of school paper.

It was at Lake City High that she met her future husband, Ken Phillips. After attending Iowa State Teachers College in Cedar Fall, Iowa she and Mr. Phillips were married in Manhattan Beach, California on March 30, 1951.

Early in her married life she worked for El Camino Junior College in the accounting department. In 1957 her first child was born in Torrance, California. Shortly thereafter the family moved to Washington, D.C. where two more children arrived to join the family. In 1963 the Phillips family moved again to the outskirts of Philadelphia, Pennsylvania. In 1973 Sue went back to work, this time in the retail printing business.

Besides running a household and working, Sue’s special interests in life were reading, cooking and interior decorating.

Both Sue & Ken retired in 1986 and ultimately moved to Laguna Woods Village.

Sue is survived by her husband, their three children, five grandchildren and her brother James Andrews of The Villages, Florida.