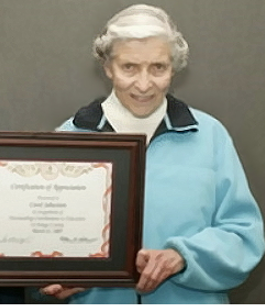 Ray Sebastian and Irene Bates Jamieson.  Her parents divorced early and she was raised by her mother, her beloved grandmother (Alice (Garneau) Jamieson) and the loving Sisters at the Immaculate Heart Convent in San Bernardino and at the Academy of Holy Names in Pomona.  Monsignor William Ralph Harvey was her friend and father, both spiritually and secularly.

Her musical education began in third grade at St Joseph’s Parochial School in Pomona and continued at St Paul’s Academy, Los Angeles.  Before leaving St Paul’s Academy at the end of 8th grade, she was playing organ for midnight mass.  She attended Ramona Convent Secondary School in Alhambra and was graduated in 1945.  She was a devout Catholic, with a faith as natural and necessary as breathing.

Mount St Mary’s College in Los Angeles prepared her for her teaching career.  She taught at several schools, even overseas, finally settling at Westminster High School in Orange County.  There, in addition to teaching Latin & Social Sciences, she coached the Academic Decathlon team for which she received the Orange County Outstanding Educator award in 2009.  She enjoyed the Academic Decathlon challenge and was sincerely interested in each individual team member, coaching and mentoring them for over 31 years, continuing after she retired from classroom teaching.  She was very proud of the team which won at the Regional & State level many times during her tenure.  With her encouragement, many of her students have gone on to highly respected schools and become successful professionals with advanced degrees.  She changed the world one student at a time. 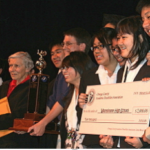