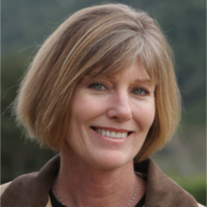 Carol’s life was a beautiful tapestry. She was a mother, wife, sister, a dreamer-a woman of love and passion, grace and deep vision. Relentlessly, she did what she dreamed. Her creative talent, her love of others and her charm, graced all she met along life’s way. And meeting her was one of God’s blessings to all who were so fortunate.

Carol was born in Gulfport, Mississippi, on October 18, 1957. She was the first child of Ken and Lola Attinger. Her siblings are Terri Jensen, Sharon Ezell, and Mark Attinger. When Carol was barely three months old-in a laundry basket in the backseat of the family’s ’52 Chevy-she made the trek to California. Her early years were spent in South Gate, Compton, and Berkeley, as her dad made his way through college until the family ultimately settled in Costa Mesa.

She had an early passion for drama and the arts, performing from a young age and sharing her gifted voice. She captured leads in many high school productions including, Dial M for Murder, The Sound of Music, Fiddler on the Roof and Romeo and Juliet. But as she pursued theatre, she discovered her flair for entrepreneurship. After graduating high school a semester early, at seventeen, she opened a sandwich shop in Irvine, at Woodbridge Lake in a deserted cabana. She did everything by herself: permits, licenses, health inspections and menus. This was only the beginning-the seeds were planted.

After Carol took her bow from both acting and her studies at CSUF, she went on to work in Property Management and then into Commercial Real Estate-rising to an executive level. She was only twenty-one when she fell in love with Bill (William J. Steed, III), a willing partner in dreaming big. Soon after their marriage, they found an opportunity in an abandoned cliff-top property in Malibu and convinced the original owner to fund their vision of rejuvenating and developing the property while they occupied it-gaining a rich reward of invaluable experiences. Carol had a knack for home design and project supervision; her General Contractor’s license soon followed. She designed, built, and decorated.

But most importantly, Carol raised four boys-never missing a beat, always with love. She was a soccer-baseball-basketball-wrestling-mom. She was deeply involved in boy scouts and homeschooled with dedication and love. And no one can forget the entertaining she did. It came naturally-she loved to cook, and her home was always comfortable, graceful and inviting-a place where family and friends often congregated. She balanced being a mother, wife, homemaker, and serving those in need. As their sons became teenagers, Carol and Bill transitioned to full-time farm life. Together they envisioned a prospering, organic farm with citrus, avocados, and blueberries, and the inimitable Fairfield Farms came into being.

In her final years, as she battled breast cancer, Carol and Bill made frequent trips to Orange County to meet with doctors and to visit family and friends. They bought a condo in Laguna Beach in 2015, and this home became a place of solace-a place where she and Bill could enjoy their new hobby of paddle-boarding and spending time together, where she could find peace and become ever closer to our Lord.

Mercy and compassion, encouragement and joy were richly integrated into Carol’s life. Wherever she went and whomever she met, she loved and extended herself to them. Her selflessness and her love for others were unforgettable. She trusted and loved God and never gave up hope. She was a child of God.