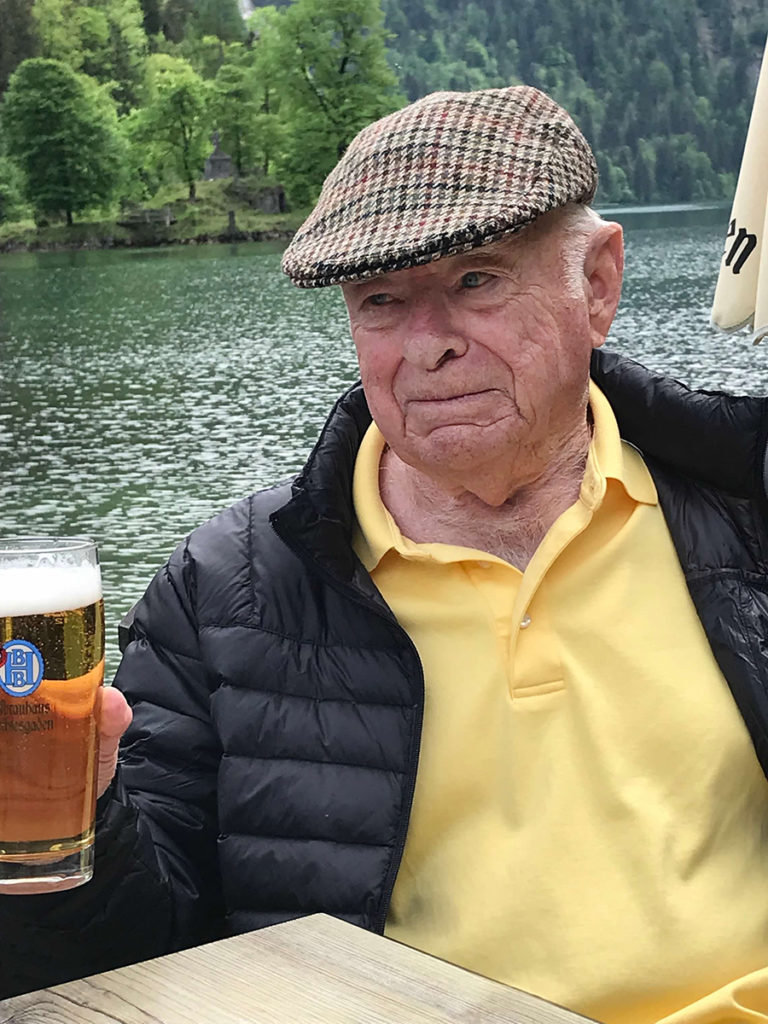 Carl was born on March 14, 1930.  He was the oldest of two children born to parents Dr. Carl William Verheyen, Sr. of Columbus, Ohio, and Marie Linneman of St. Louis, Missouri.

Carl spent his childhood with his family in Beverly Hills, California and graduated from University of Southern California in Radio and Television.  He married Alicia Lorraine Kohlbush in 1953.  Shortly thereafter they moved to Maine, where Carl served in the United States Air Force for two years.  After returning to California and a brief stint in the oil business, he started a precision cleaning company named Astro Pak, which became a leading contractor for NASA during the race to the moon in the 1960’s.  He grew the company from a simple start up to a major corporation with multiple divisions across the country, serving the Navy’s submarine community, Cape Canaveral, Vandenberg Air Force Base, The National Ignition Facility and pharmaceutical companies, to name a few.  Carl and Alicia had four children together and raised their young family in La Canada-Flintridge, California.

Carl is survived by his dear sister Alicia Atlee and family.  He is also survived by his first wife Alicia Adams and their four children and spouses, eight grandchildren, and two great-grandchildren. They are Carl (III) and Carol Verheyen and son Geoffrey; Carolyn Verheyen and Gregory Nowell and daughters Shana and Kera; Ken and Tera Verheyen, and children Kohlman, Stephanie and Davis; and Kathryn and Mark Ferdi and children Nate and Natalie. Carl’s great grandchildren are Valor Verheyen (Kohlman) and Raven Anderson (Kera).  Throughout our lives, Dad encouraged and inspired each of us in our various life pursuits, contributing priceless wisdom, much love and matchless wit.  His place in our lives cannot be filled—he leaves a lasting legacy in our hearts forever.

In 1977 Carl married Mary (“Bunny”) Louise Hunter. They spent many happy years together in Dana Point, California, until her death in 2006.  They also enjoyed their time at High Jack Ranch, an alfalfa ranch they owned east of Ojai, California, where they shared a passion for agriculture and animals.  Bunny had 6 children from her first marriage, and Carl is deeply mourned by them as well:   Cindy Davidson, Randy Weber (predeceased), Paul Weber, Mary Brint, Terry Weber and Tim Weber.

Carl’s many attributes have touched us all deeply, and it was impossible to know him and not be impacted by him.  His incredible wit and sharp mind were known to all.  Supremely logical and analytical, an avid reader and researcher, he enjoyed making spreadsheets of everything from his finances to his daily polo shirt rotation. He was your man if you needed help with coordination, from early on as a lieutenant delivering nuclear weapons to SAC bombers, to his later years planning every detail of his ten beloved trips to France with his daughters.  He loved art and architecture, as evidenced by the many fine watercolors he painted throughout his life.  He was devoted to each of his Labradors over the years, with his most recent Sarah holding a cherished place in his heart and staying at his side until the end.  Carl somehow managed to be sarcastic and charming all at once, and many loved him for it, including more friends and neighbors than any of us knew.  A man of incredible sensitivity and depth, he spent his later years searching for answers to life’s deepest questions of faith.  With a twinkle in his blue eyes, he spent his last days showing humor, gratitude and love to the doctors, caregivers, friends and family who were by his side.  We are forever grateful for the many ways he touched our lives.  He will never be forgotten.  Dad, Pere, Grampa, Granddad, DB, Peach, Warden, Dr. Delight,. Rest in eternal peace.