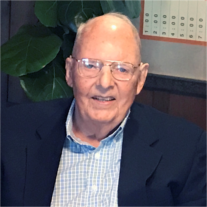 He graduated from Marquette University in June 1941 with a BS in Business Administration then went to General Theological Seminary of the Episcopal Church in New York City studying for the priesthood where he graduated in June 1944 with a Master of Divinity. He was ordained a priest on 12 October 1944 in Milwaukee, WI. He continued his studies at Nashotah House Theological Seminary in 1954 earning a Master in Sacred Theology in May 1956

Carl and Frances were married on 9 June 1947. He became the rector of Calvary Episcopal Church in Richmond, TX then rector at St. Mathew’s Church in Bellaire, TX, suburbs of Houston. They returned to Wisconsin in 1953 where he was the Assistant at Trinity Episcopal in Wauwatosa. In 1957 he became the rector at All Saints, Appleton, WI. In 1970 they moved to Christ Church, Springfield, MO. He retired from there in 1985. He worked as a supply priest at St. Andrew’s Church in Mountain Home, AR in 1986 and at St. John’s Church, Neosho, MO in 1987. From 1990-1997 he was the Part-time associate at St. John’s Church in Springfield, MO.

In lieu of flowers, donations may be made to The Sophie Miller Education Fund which provides scholarships for the Episcopal Communities and Service (ESC) employees who wish to further their education. Contributions may be sent to: