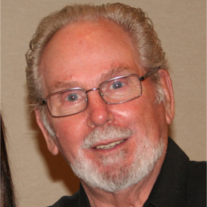 Calvin was born to Waldemar (Walt) and Mary (Cramer) Hecht on March 10, 1938 in Moline, IL, as a young child he moved with his family to Albuquerque, NM where he grew up. He graduated from Highland High in Albuquerque in 1955. After graduation he attended Augustana University in Rock Island, IL. In 1956 he entered the United States Marine Corp, Camp Pendleton, a proud distinction he carried with him for the rest of his life. In 1958 he attended University of New Mexico in Albuquerque, NM.

Cal’s career took many different turns in various industries, it didn’t matter what the field was, as long as it had people, he could manage it. In the early 1970’s Cal was the co-founder of Santa Fe Harley Davidson. Many weekends were spent at the motocross tracks where Calvin raced motorcycles in the summer and snowmobiles in the winter. Cal’s pastimes were his art work in his younger years, and after retirement he turned his hand to writing, where he became a published author of several novels, technical books and Christian theology books. There wasn’t any thing in life more important to him than his relationship with Jesus and he loved to share it with his family, often wanting to be reassured of his children and grandchildren’s eternal life in Heaven.

He was preceded in death by his parents, Walt and Mary, stepson David Birt, grandson, Bryan Kannor.

Memorial services will be held Tuesday, June 14, 2016 at 9:30 am at O’Connor Mortuary, Laguna Hills, CA. Interment will be immediately following services at Riverside National Cemetery with military honors.