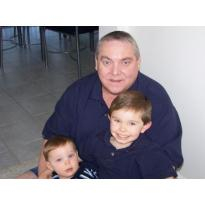 B. Dale Boggs
Laguna Niguel, CA, formerly of Kentwood, MI
Dale Boggs was born December 31, 1959 in Michigan and went to be with the Lord May 18, 2007 in Fountain Valley, California. He was 47 years old. Dale was most recently a General Manager at the Michigan Packaging Company, where he worked for 26 years but had moved to California with his wife and two youngest sons to pursue their dream of owning their own business. Dale will be lovingly remembered by his wife of 17 years, Dorenda Boggs; daughters, Layla Sever and Lila Boggs; sons, Benjamin Boggs, Darion Boggs and Davion Boggs; mother, Fay Boggs; sisters, Anita Wheaton, Diane Newsome and Merry Reading; brother, Pat Boggs and grandchildren, Hailey, Tristen and Odin.  Dorenda’s family includes her mom and dad, Donald and Patricia Block Dutton, MI; her brother, Devon Julie Block Dana Point, CA and her sister still in Grand Rapids, Michigan, Donelle Block. Dale was preceded in death by his father, Franklin ‘Burr’ Boggs.  A graveside service will be held on Tuesday, May 22, 2007 at 2:00pm at El Toro Memorial Park and a memorial service will be held on Saturday in Eaton Rapids, MI.