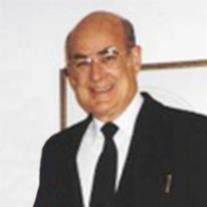 Burl Dean Smith was born on March 5, 1926 in Craig County, Oklahoma and passed away in Laguna Woods, California on February 20, 2014. He had careers in both opera and education.

As a young man Burl won the best actor award in the Pasadena Playhouse Tournament of One Act Plays. He was the national first prize winner of NBC’s Opera on the Air contest. He took second place nationally in a western and middle states speech contest.

Burl Dean Smith served as an Apprentice Seaman, ENSIGN, with the
U.S. Navy before he married Patricia Ann Smith. The newlyweds left for
Rome, Italy for their honeymoon. While in Italy Burl studied voice at the
Musica Conservatoria di Santa Cecilia and with Tito Gobbi, Italy’s popular operatic and movie star. He found work as a security agent for the Economic Cooperation Administration in Rome and Paris.

Burl performed 63 leading roles in opera, oratorio, and other musicals all over the United States including many performances at the Greek Theater. He performed the title roles in the West Coast premiere of Stravinsky’s “Oedipus Rex” and the West Coast premiere of Honegger’s “King David.” In the world premiere of the American Indian opera “Red Cloud,” Burl was the leading tenor. Performing as Lt. Pinkerton in “Madam Butterfly,” he toured with the Fujiwara Opera Company of Tokyo, Japan.

When their daughter Cynthia was 15 years old, Burl and Pat went back to Europe for a year and Burl worked as a science and advanced reading teacher for the U.S. Military School in Paris. Although he loved opera, Burl studied pre-med at USC and graduated with a B.A. and an M.A. from the University of Redlands in 1947. For over 30 years he served as a public school teacher for grades 3 through 12 and an administrator for elementary, middle, and high school levels. Burl was awarded “The City’s Outstanding Citizen Award” and “The Cultural Arts Council Performing Art Award” in Riverside, California.

One of Burl Dean Smith’s favorite things to do was snorkeling in Laguna Beach, California and he and Patricia took several Club Med trips to warmer climates. He enjoyed living in Laguna Beach for 10 years when he retired and Burl and his wife lived in Laguna Woods, California for the last 17 years of their lives. Burl is survived by his daughter, Cynthia Ann Smith.