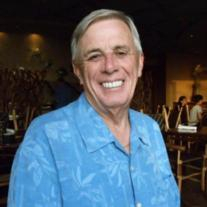 Brian attended the Canadian Naval Academy in Victoria, Canada and then completed his Masters Degree in Chemistry at Cal State Fullerton. Brian invented the glue that was used by Kodak to hold instamatic photos together while working at Unocal Chemical in Brea, CA. Brian’s career was with the same company through several buyouts for 46 years.

Brian was an avid sports fan whose favorite teams were the Anaheim Angels and the Los Angeles Kings. Brian played hockey as a young man for the Chicago Black Hawks farm team. Brian loved the game of golf and played golf every weekend with his many friends. Brian will be missed and remembered by all who knew and loved him. Brian is preceded in death by his parents Ormand Albert Holmes and Margaret M.W. Nicol Holmes.

In lieu of flowers a donation in Brian’s name can be made to the American Lung Association.

May he rest in peace.