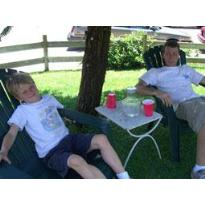 Bret Harris passed away on August 5, 2006 after a two-year battle with cancer. He was born on January 1, 1967 in Santa Ana and lived with his parents, Darrell Dean Harris and Patricia Harris, and his sister, Koa, in Huntington Beach.

After his father passed away in 1983, he spent time with the Kemp family. During college he went to live with the Kemps and was encouraged to join the LAFD, which he did in February 1989.

Bret met Lori and dated for two years before they were married on October 3, 1992. He also adopted Lori’s son, Russ, and the three of them lived in Huntington Beach. Jacob Montana Harris was born on August 16, 1993, and when Lori became pregnant again, the family moved to a larger home in Mission Viejo. Adam Hamilton Harris was born on June 6, 1995, Corben Sawyer Harris on September 1, 1997, and finally Bailey Katherine Harris on February 23, 1999.

Bret loved to spend time with his family, and the combination of a firefighter’s schedule and homeschooling gave him the chance to do many things like camping in the Redwoods and Yosemite and making their annual family trip up the Pacific coast to Washington down through Idaho, Montana, Utah, Arizona, and back home. He also loved to ride dirt bikes in Ocotillo Wells and in the annual Buzzard Bait ride, but he especially enjoyed watching his boys tear up the dust, not to mention his dainty daughter on her quad. He also loved to hunt, which gave him a chance to sit or walk quietly with his sons while taking in the beautiful surroundings and sitting around the campfire reminiscing about what happened earlier that day. From snow skiing in Big Bear to waterskiing at Parker, Bret enjoyed the thrill of seeing his children advance each year.

He not only enjoyed being with his family outdoors, but also at home, where he cherished the pile of broken toys on his work bench, repairing the house, gardening, fixing and washing cars, which he did to serve his family as an example for his boys to follow. He never grew tired of doing anything for his family. He made sure his family had everything they needed above and beyond anything he wanted or desired. His home lived and breathed the verse, ?As for me and my house, we serve the Lord.?

When you entered his home, it didn’t matter what was happening in the world, since he was resolved to hear His Heavenly Father, by His grace, tell him, ?Well done My good and faithful servant.? He truly answered and held himself accountable to God. He accepted the Lord into his heart at the age of 4 and was raised in a loving Christian home. He would admit that by the age of 18, his walk with God was not as resolute as it had been earlier in his life, but just before Jacob was born in 1993, he began to attend Calvary Chapel of Costa Mesa where Lori, Patricia, and his step-father, Ray, attended. Because God’s Word does not return void and God was merciful to him, Bret returned to walk closely with the Lord and, by God’s grace, became a truly godly man, husband, and father. When Bret and Lori moved to Mission Viejo they attended Calvary Chapel of Saddleback Valley now known as Calvary Chapel of Mission Viejo and with their help grew in their Christian walk while making life-long friends. Ancient Hope was the next church family that embraced the Harris Family. The Harris family eventually came to rest at Mission Hills Church. Throughout his Christian walk, Bret would be quick to point out his own failures, being the first one to apologize and to turn the worn pages of his Bible to guide his life.

His dying wish is to leave his legacy of faith for Lori, his entire family, and his friends so that heaven would truly be a place where our Lord promises to wipe away every tear. To all of you, Bret exalts the risen Christ who said that He is the ?the way, the truth, and the life? and that ?no one comes to the Father except through Me.?