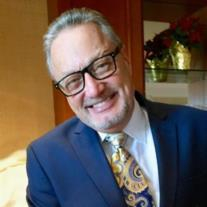 After spending his early childhood in Burlingame, Calif., Brandt graduated in 1969 from Del Oro High School in Loomis, Calif. He then earned a BS degree in human resources management from California State University, Sacramento, and later attended executive management programs at Northwestern University in Chicago. He was a member of the Phi Beta Lambda organization and edited his college newspaper.

Brandt married Barbara Ellen Reed in 1973, right before college graduation, in Sacramento. Together, they happily brought three daughters into their family between 1977 and 1989; Brandt devoted much of his life to lavishing time, energy and love on his tribe.

Brandt was an executive for 22 years at Moore Corporation in the Fresno, Chicago and San Francisco areas, most recently as vice president of western area sales and executive sponsor of Moore’s sales automation project. In 1995, Brandt was honored with the Moore Chairman’s World Class Award as Top Senior Executive in the U.S. in front of an audience of thousands. He joined Altec Inc in May 1996 as chief operating officer, president, and partner; he remained dedicated to the company’s success until his passing.

In his free time, Brandt had passions for cars, interior decorating, and spending time with his friends and family. He prided himself on the lifelong friendships he built and did his best to maintain them with frequent calls, letters and visits. Looking for ways to enrich the lives of others, Brandt directed fundraiser call campaigns for SchoolPower in Laguna Beach and volunteered extensively at Mercy House in Santa Ana, Calif., receiving a Santa Ana 2004 Community Building Award. He also volunteered for many an overnight shift at homeless shelters during his years in Illinois.

Brandt was preceded in death by his parents, Donna Marie Klingler and Clarence Ray Morrell. He is survived by his wife, Barbara Morrell, and his companion, Jeff Quinn; his daughters Kara (Ed) Malley, Kate (Tom) Patterson and Kelly Morrell; his sisters Kelly (Gary) Kuntz and Karin Morrell; his grandchildren Angela, Scott, Joseph, Dalton, Ethan, Julia and Madison; and his dogs Parker and Penny.

A memorial service will be held at O’Connor Mortuary, 25301 Alicia Parkway, Laguna Hills, CA 92653, at 7 p.m. on Friday, June 5. Should friends desire, contributions may be sent to http://mercyhouse.net/donate/.