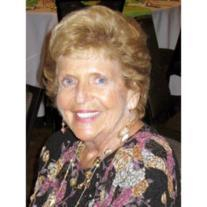 Beverly Handfield, age 86, passed away peacefully at her home in Mission Viejo, California with her family by her side on Sunday November 2, 2014.

Born in 1928 in Fitchburg Massachusetts, Beverly was the only daughter to Hirum and Julia Martin. Beverly was raised in Worcester and became a registered nurse at Worcester City Hospital. She married her mate of life Bob Handfield in1950, and honeymooned toasting in the New Year in Times Square. They shared 48 years of marriage until Bob passed in 1998.

They started their family on the east coast and had three children, Cheryl, Rick and Mike. In 1971 they moved to California and settled in Irvine. The most important part of her life was her family and her friends.

Visitation is scheduled for 7-9 pm on Thursday Nov. 6 at O’Connor Mortuary.
Funeral Mass will be celebrated at 10:00am on Friday, Nov. 7 at San Francisco Solano Catholic Church, Rancho Santa Margarita, California. The burial will follow at Holy Sepulcher Cemetery, in Orange, California.

In lieu of flowers, the family has requested donations be made to the American Lung Association, http://www.lung.org.