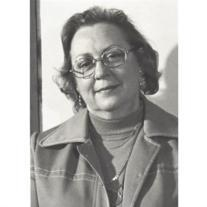 Betty Rose Snyder, genealogist, author, artist, musician, patriot, sports fan and beloved mother, grandmother and great-grandmother, passed away peacefully at the age of 92 on Thursday, Jan. 10, at her home in Laguna Hills, CA. Born Betty Rose Pond on April 8, 1920, in Rockford, Ohio, Betty was married to her high school sweetheart Clyde Wilbur Snyder for 52 years until his passing in 1992. She is survived by her four children. Larry and his wife Connie live in Cincinnati; Gary and his wife “Teri,” in Irvine, CA; “Bill” and his wife Julia, in Heathrow, FL; and Barbara Kogerman and her husband Col. “Bill,” in Laguna Hills. Seven grandchildren and six great-grandchildren survive. Two grandchildren are deceased.

A young beauty, Betty became a pageant “Princess” in Celina, Ohio, before her marriage. She also liked to boast that she was a member of the high school band for seven years, having joined as a trombonist in the sixth grade. When Clyde volunteered for the army during WWII, she was left at home with her two little boys and a babe-in-arms–like many, not knowing whether she would see her husband ever again. His letters home from the war are a treasured family heirloom. Self-taught as a youngster at the piano and organ, Betty served as organist and choir director for the Rockford Methodist Church, later developing her talent as a visual artist. She was an active volunteer in Mercer County politics as well as an avid member of the local bridge club. She developed an interest in her ancestry after inheriting two very old Van Wert and Mercer County, Ohio, histories. Clyde, meanwhile, was the manager and catcher on the local American Legion Baseball Team and led them to near-legendary status in rural western Ohio.

Having launched all her children into higher education, Betty and Clyde moved from Ohio to Foster City, CA, in 1969, where Clyde took on western regional management responsibilities for his employer. There Betty joined the Daughters of the American Revolution (DAR), becoming a certified genealogist while honing her talent as a photographer. She traveled to England and made several trips to the East Coast, Ohio, and Utah to further her family research, ultimately publishing two books on her Pond ancestry and a monograph on Snyder ancestry. Her award-winning first book revealed that her family is descended from the British Tudor monarchy. She also discovered that her ancestors founded the first Baptist Church in the Northwest Territories and solved a mystery about the source of two silver candlesticks much prized by the same congregation to this day. Her monograph revealed Clyde’s Mayflower ancestry.

It was also in Foster City that Betty became a die-hard Giants and Forty-Niners fan. She and Clyde scored front-row season tickets behind the visitors’ on-deck-circle at Candlestick Park and seldom missed a Giants game. Betty developed a speaking relationship with such greats as Pete Rose. (“Hi, Betty.” “Hi, “Pete.”) They were in their seats for the World Series game when the stadium was rocked by the infamous earthquake that cancelled the game and caused so much devastation. To her death, she never missed a game when either team was broadcast. Despite her death two days prior, her family are convinced she somehow managed to watch Saturday’s Packers-49’rs game and exert entirely too much influence on the outcome.

Betty moved to Laguna Woods Village, CA, in 1995 to be nearer her Orange County children. As Regent of the Aliso Canyon Chapter (Laguna Woods Village) of the DAR, and president of the local chapter of Colonial Dames, Betty kept up her advocacy for historical truth. She championed Civil War heroes wherever they rest when she traveled to Louisville, KY, in 2003 to witness a ceremony she set in motion to pay tribute to the thousands of soldiers who, she had discovered through researching an ancestor, were buried without appropriate military honors because they had died of “camp fever” instead of in battle. With four generations of Ponds represented, she spoke to the large crowd of military and other dignitaries assembled. She was thrilled to receive the Distinguished Service Award from her DAR chapter in 2006.

Betty remained mentally sharp to the end, completing two crossword puzzles daily and following sports on TV. She kept her sense of humor, and she loved her assisted living apartment in Villa Valencia in Laguna Hills. She was intensely proud of her family and, as a final gift only a few weeks before her death, was able to watch her daughter Barbara sworn in as Mayor of Laguna Hills, and Barbara’s daughter Elizabeth Vaughan deliver a thrilling version of “The Star Spangled Banner.”

After being stand-out athletes, her children became successful leaders in business, academia, and politics. Her grandchildren possess a variety of academic, business, educational and artistic accomplishments. She got to know three of her great-grandchildren and cherished the pictures of the three littlest in Florida.

Betty Snyder left many legacies: love of family, respect for country, and beauty for generations to come. She was a Christian lady who will no doubt be welcomed into the arms of her Lord, her husband, and her two grandchildren who died before their time.

Once again, she will have the best seat in the house.