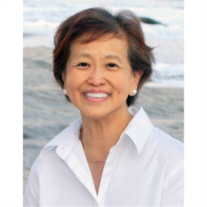 Betty Lee Gee was born smiling on December 18, 1937 in Manila, Philippines. She earned her bachelor’s degree in Home Economics from Philippine Women’s Institute then immigrated to the United States for graduate school. On August 18, 1963, she married the love of her life, Arthur Gee, at the Columbia University chapel in New York City. Together they created a wonderful life with their three children-Clinton, Darrin and Evette Gee.

Betty dedicated her life to her family. She often told the story of how, as a young girl, she had prayed for a loving husband, children and grandchildren. She left her career as a registered dietician for many years to lovingly nurture the growth of her three children. She made sure each of them knew they were loved. Always active in her church at Mission Overseas Chinese Church in New York City, she was devoutly dedicated to her faith. She was an optimist even in the face of challenging times. Her motto was, “Why worry when you can pray?”

In 1977, the family moved to Chico, California where her husband was a professor at Chico State University. They immediately became an influential part of the community. She was passionate about helping immigrant Asian families adapt and thrive in the United States. She took many by the hand and helped them create fruitful lives by driving them to schools, doctors’ appointments, immigration meetings and serving as a translator and advisor. She filled in forms and applications for those who could not read or write English. Many of these families have become successful and to her delight, many of the children who spoke little or no English when they first arrived now have college and graduate degrees. She upheld the legacy passed down from her father and mother that education was a cornerstone for personal growth, success, and compassion for others. She and her husband were instrumental in creating an active and engaging Asian community association that grew from a handful of people to several hundred.

Betty worked for several years as an elementary school noontime supervisor and was an active volunteer for several organizations, including Enloe Hospital. After her children left for college, she became a fixture at In Motion Fitness Club, where she was one of the inaugural members as well as one of its most active and fit members. She loved the yoga and Zumba classes and also walked daily with her husband. Betty was an avid reader of newspapers and magazines, and cherished their evening ritual of watching the evening news and movies in their matching recliner chairs.

In 2009, her husband Arthur had bypass surgery. Unwavering in her faith that they were life partners through thick and thin, she dedicated herself to helping him recover and making his life as abundant as possible. She has been by his side constantly, even after he was diagnosed with Parkinson’s Disease a few years later. She always kept a smile on her face and never stopped encouraging and motivating her husband to be happy.

In 2014, Betty and her husband moved to the Brookdale Senior Living Community in San Juan Capistrano, California. Within hours of her arrival, her infectious smile and laughter had spread to others. She touched the lives of many residents, several who became close friends, as well as the staff. She would walk her husband around the facility, always smiling and laughing, talking to everyone she encountered. She was named a resident representative and became the ambassador and welcome committee. Every time a new prospective tenant toured the facility, she would rush up to them and tell them what a great place Brookdale was and how much she loved living there.

Betty was often seen dressed to the nines in head-to-toe color-coordinated outfits, with complementary accessories and a pocketbook, as she called it. She believed in always looking your best, and encouraged her children to do the same. “Look at yourself in the mirror!” she would tell them every time before they left the house. It wasn’t about vanity, but about cultivating a positive self-image.

Betty always loved a party and welcomed everyone with open arms. “The more the merrier!” she liked to say. She had a gift for standing in front of a crowd and sharing her story while encouraging others to do the same.

Betty told everyone, “My cup runneth over.” Family was the most important thing to her, and the walls of her house were always filled with pictures celebrating her friends and family, and especially her children and grandchildren. She passed away peacefully on December 12, 2015 after a courageous battle with complications from heart valve replacement surgery. Her loved ones were with her.

A celebration of life for Betty will take place on Monday, December 21, 2015 at 1:00 pm at the O’Connor Mortuary in Laguna Hills, California. A donation in memory of Betty Gee will be made to a charitable organization. In lieu of flowers, if you would like to contribute you may send a check to Arthur Gee, c/o Darrin Gee, PO Box 383807, Waikoloa, HI 96738.