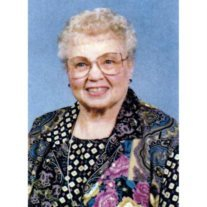 Betty Ann Meliza of Mission Viejo, 94, passed away peacefully and gently on Sunday, March 30, 2014 at home. She is survived by her husband of 66 years, Raymon E. Meliza and her son Michael W. Meliza. Betty was born in Peoria, Illinois on October 13, 1919, the only child of Oliver and Mildred Turgeon. She was raised by her aunt and uncle, Mary and Bill Berwick, in Peoria where she graduated high school and later met her future husband Ray. Betty was a loving wife and mother, a devoted companion, a wonderful friend to many, and a happy person who loved life and all it brought to her during the years. She and Ray lived in many cities in the US and spent four years in England during the 1960s. After Ray’s retirement, they moved to Mission Viejo in 1985, where they made many new friends to share the good life California has to offer.

Betty loved to read, play bridge, and shop, and she found time for those activities in each of the 16 cities where she and Ray lived during their married life. An open house memorial is being planned to celebrate her life and will be announced sometime in the near future. Having been challenged with macular degeneration for years, Betty was a loyal contributor to the National Federation of the Blind. If you wish to send a memorial on her honor, the NFB could be considered.