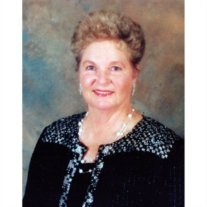 Beth Mills Trembly, former resident of Canyon Lake, passed away peacefully on June 18th, 2013, with her loving husband and daughter by her side.

Born May 28th, 1924, in Provo, Utah, Beth spent her early years in Provo until her family moved west to Huntington Park, CA. She graduated from Huntington Park High School in 1942 and married her high school sweetheart, Alfred William Trembly in 1943. They both celebrated 71 years of marriage last January. Beth was a fulltime homemaker and raised three children while her husband served in the army then became a police officer in San Pedro and the LAPD. They moved to Santa Barbara in 1971 when Alfred became Chief of Police. Upon retirement, Beth and Al moved to Canyon Lake and lived there until 2007.

Her daughter, Marebeth, preceded her in death in 1999. She is survived by her loving husband, Alfred; children, William and Michelle; eight grandchildren, Lisa, James, Benji, Jesse, Justin, Tyler, Bryant and Brett and five great-grandchildren, Adler, Taylor, Jackson, Connor and Scarlett and one great-great grandchild, Logan.

A Celebration of Life service will be held on Saturday, June 29th, at 11:00am at Canyon Lake Community Church, Canyon Lake, CA. The family wishes to acknowledge all the love and support they have received from a bounty of loyal and loving friends. Beth was blessed by many along her journey.