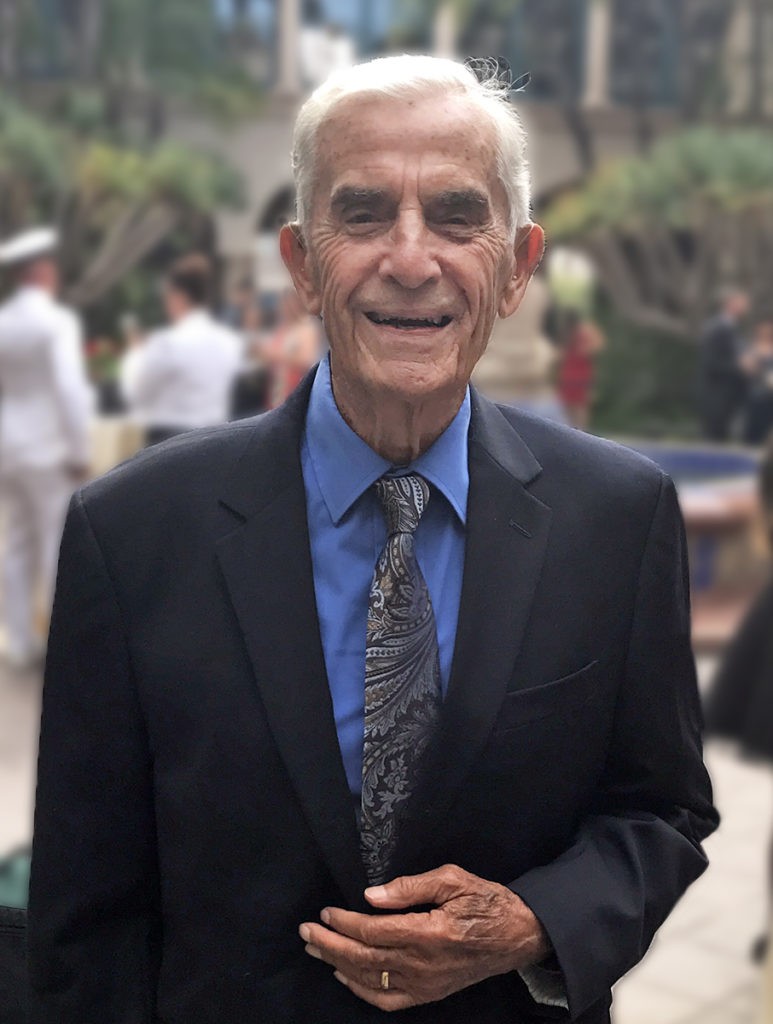 Bernard J. Trifoso passed away on Tuesday, January 26, 2021 holding the hands of his two daughters with their husbands by their side. Bernard (Bernie) was born September 21, 1923 to Samuel and Serafina Trifoso on Washington Avenue in Elmira, NY. He was one of ten children. His parents were immigrants from Sicily who came to America and worked hard all of their lives and instilled that work ethic in all of the children along with love for family and for others. Bernie from the youngest of age wanted to assimilate in the American culture and embrace all the goodness of this country. He was a true patriot. He couldn’t wait to enlist in WWII when he was 18 to defend our country and liberate Europe. He served in the United States Coast Guard as a Pharmacist Mate First Class for three and a half years and completed two tours one at Normandy and the other at Okinawa where he received two bronze stars for saving men’s lives aboard a ship that had been blown up.

In 1947 he married the love of his life, Patricia Whitlock. They had three children Michele, Tom, and Lesley. Bernie worked hard and was a successful sales representative for Metropolitan Life Insurance for over 60 years. He was a life member of Metropolitan’s prestigious President’s Council where he qualified for the Million Dollar Round Table where he won many of their annual merit incentive trips. Bernie attended Columbia University College of Pharmacy; was a graduate of Elmira College’s Veteran Extension Program; President of the Elmira Life Underwriters; life member of the Fur Fin Club; usher at Our Lady of Lourdes; outstanding athlete in high school; and an avid golfer and bridge player at the Elmira Country Club.

At the age of 93 he and his wife, Patricia, moved to California to be cared for by their daughter, Lesley, and her family. It was there in California that a new chapter of his life began. He met and made many wonderful new friends and reconnected with the US Coast Guard as their WWII icon and hero. They honored him with attendance and recognition at Admiral Galas; throwing the first pitch at San Diego Padres Games; numerous Coast Guard assemblies; Veteran and Memorial Day events; personal tours of Coast Guard bases; boat rides on cutters; speeches to service men, captains, and admirals; and his most recent a Coast Guard Cadet honoring him at his Senior Day Care Center with a presentation of a flag flown on his behalf and then singing patriotic songs with all the residents.

The greatest day of his life was raising his hand to receive Jesus Christ as his Lord and Savior while watching an altar call on TV that was taking place at a live worship event in Washington DC this past October. He said to his daughter that night while putting him to bed, “I can now pass with a smile on my face.” Bernie was able to leave the hospital and pass away with his family around him at his wife’s caregiver’s home. The last night of his life, he spent sharing the same room with his beautiful bride of 72 years.

Bernie was a loving husband, devoted father, and friend to everyone. He is and was incredibly loved and will be missed by many. His memorial is Friday, February 5th, at 9am at Oceans Church in San Juan Capistrano, with an immediate burial at the military cemetery in Miramar, San Diego County, where he will receive full military honors with a color guard, helicopter fly over, and military officers present. Bernie Trifoso loved the Lord, loved his wife, loved his family, and loved his country. We love you dad. Thank you for all that you did for us and for instilling the love of God, the love for people and the love for our country in us all.