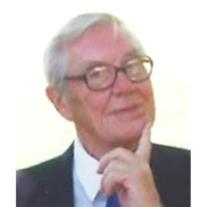 Dr. O’Loughlin was born in Baudette, Minnesota. His father was a logging camp trail boss, and later owned a restaurant and store. His mother was the teacher at a one-room school. Graduating from high school in a small town in Minnesota in the midst of the depression, he joined the Civilian Conservation Corps in the North Woods, where his Eagle Scout first aid merit badge led him to be appointed to take charge of first aid and to be nicknamed ‘Doc’.

A spontaneous informal interview at St. Thomas College in St. Paul and his four year’s lettering in high school football led to quick admission and a scholarship augmented by raking leaves and waiting tables at the college and hoisting beer barrels at Hamm’s brewery. President of the pre-med society and ‘Mr. Tommy’, he received his B.S. in 1937. He then attended Creighton University Medical School, where he worked in his boarding house and the university cafeteria. In 1941 he received an M.S. in physiology and experimental medicine. In 1942 he received his M.D. and met a ‘pretty blonde in a red dress’ at a dance at Duquesne University. She was a good dancer. So was he. His marriage to Margaret Delaney of Marcus, Iowa lasted 67 years.

He volunteered for the U.S. Army Air Force in 1942, serving at medical facilities in Kansas, Oklahoma, Tennessee (where he furthered his interest in radiology) and Texas, where his wife learned to shoot snakes with her .25 automatic. He was discharged as a Major in 1946, had a fellowship in radiology at Southwestern University and worked at the Veterans Administration, then returned to Minnesota with his growing family. In 1947 through 1949, he worked at the Veterans Administration and had a fellowship in radiology at the University of Minnesota, receiving his Ph.D. in 1950. His lectures on the results of his prior four years of clinical research on fellow veterans in 1951 created quite a stir: smoking cigarettes causes lung cancer. They also resulted in an invitation in 1952 to join the medical faculty at UCLA, where he became the founding chief of the diagnostic radiology department. He continued consulting for the Veterans Administration hospitals, and was chief radiologist at Los Angeles County Harbor Hospital.

In 1961 he became a NSF Senior Postdoctoral Fellow at Oxford University, commuting to Dublin where Margaret supervised their by now eight children at the more available Catholic schools. He spent the summers of 1961 and 1962 driving the ten of them around the campgrounds of Europe in a Volkswagen van. His children, who thus acquired the travel bug, were later able to stay with his grateful international students in places as diverse as Madrid, Genoa and Madras, India.

In 1967 he moved to the new University of California Medical School at Irvine and served as Director of Radiological Services at Orange County Medical Center. Living in Huntington and then Newport Beach allowed him to indulge in his new hobby: sailing the ‘Maggie Dear’.

In 1974-75 he served as a visiting professor at the Royal Postgraduate School of Medicine in London. In 1976, he returned to Los Angeles, serving as Chief Radiologist at UCLA Olive View Medical Center and consultant at Wadsworth VA Hospital. In 1987 he retired and returned to Newport Beach.

Dr. O’Loughlin served on numerous boards and committees, and led many of them – such as the Catholic Physicians Guild. He was a Benedictine oblate and a co-founder of the Mission Doctors Association. His 1986 curriculum vitae was 21 pages long with an eight-page addendum listing his professional publications.

But he was not all work. He also presided at a formal family dinner table where the conversation ranged from Heisenberg’s uncertainty principle to the monkey in the chandelier. They threw great parties – whether the formal dinner party for the visiting South African bishop, the beer keg and BBQ by the pool or standing around the piano played by a Jesuit priest while a renowned cardiologist led them in singing all the hits from the 1940s. Dad had a beautiful voice.

He was predeceased by his wife Margaret; daughter Sara; and son Paddy Kevin. He was survived by his daughters Susan Shelly and Brigid Maddox; sons Ben, John, Kevin, Rory and Brian O’Loughlin; fourteen grandchildren; and eleven great grandchildren.

Funeral services will be held at Our Lady Queen of Angels in Newport Beach at 1:00 p.m. on Friday, September 18.