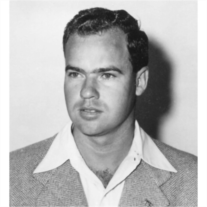 Despite the tender care of his devoted son, Berkley Hollister left this mortal existence the morning of December the 9th, 2015, as he had wished, at his home in San Juan Hills East, San Juan Capistrano, Orange County, where he had lived with his wife, Edris for nearly 30 years. His passing at age 95 was anticipated but dreaded by his family and all who knew, loved and respected him.

Berkley E. Hollister was born in Los Angeles, California, to Earle B Hollister and Irene F. (Bartle) Hollister on Nov 12, 1920. Earle and Irene had moved to Hollywood three years earlier from Osage, Iowa, where they started their family with two sons, Robert (Bob) and Gerald (Gerry). All of Earle’s and Irene’s parents had moved to Los Angeles from Iowa before 1920 for their health in retirement. Missing their children and their grandsons, Earle’s parents paid for them to move their young family by railroad to Los Angeles County and Irene’s parents provided a home for them close by. Earle was a frugal man and opened a small neighborhood market and was advised by his father who had also been a merchant. He was able to have a new home built for his wife and sons in Beverly Hills but during the depression they rented it out and lived in their first home in Hollywood. Later, Earle joined his older brother in marketing games to newspapers to grow subscriber count. Tangle Towns was published in the Los Angeles Times into the 1960’s. Earle mainly supported his family as a Circulation Manager, then Newspaper Distributor for the LA Times in Pasadena and then Whittier. Earle and Irene retired to San Clemente in the mid 1960’s.

Bob, Gerry and Berk were always good friends, and Berk had fond memories to share of his grandparents. As a young man, Berk’s father supported his interest in cars and he owned several roadsters he raced on the dry desert lake beds. He graduated from Hollywood HS and took classes to qualify for the Army Air Corps test after the United States joined World War II in 1941.

While waiting for Basic Training, he met the love of his life, Edris L. Smith. They married September 18, 1943, just before he was deployed overseas to England as a second lieutenant in the 434th Fighter Squadron, of the 479th Fighter Group. After 271 hours of combat, he returned home, remaining in the reserves until 1957, where he was promoted to the rank of Captain.

Berk and Edris raised their three children, Glenn, Linda and Jeff, in Altadena, California. Berk was proprietor of the LA Times Newspaper Dealerships in Pasadena, and then Yorba Linda. Retiring in 1979 to San Juan Capistrano, where they both enjoyed golfing and RV trips, some to his squadron reunions and others with their Vaqueros Motorhome Club. After almost 65 years of marriage, his sweetheart, Edris, passed away in 2008 at home.

There seemed to be nothing that Berk could not build or fix. He was a master of DIY, from repairing the family cars to building a patio cover. He kept his cars clean and in top running condition always with a clean windshield. He never flew without giving the plane a preflight check. He enjoyed preparing their RVs for trips with their club and missed golf immensely after a stroke left him too dizzy to play.

Berk instilled his patriotism and love for this great country into everyone he knew thru his service to our nation and the flag that represents it. He was a humble, loving, caring man who will be greatly missed by his beloved family and friends.

A graveside memorial with Military Honors this week will precede interment with his beloved wife and near his parents in the Valencia Court of Pacific View Memorial Park, Corona Del Mar, California.

In lieu of flowers, please consider contributions to the Wounded Warriors Project.