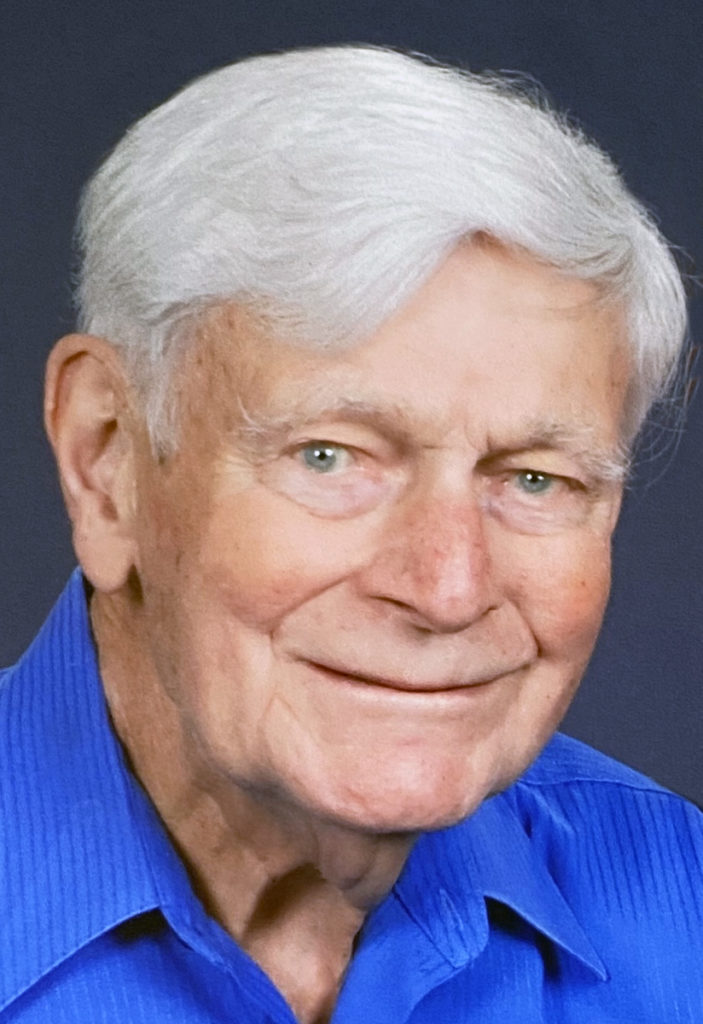 Benjamin “Ben” J. Stables, Jr., age 95, passed away on November 26, 2019 at Saddleback Medical Center in Laguna Hills, CA. Ben was born in Philadelphia July 20, 1924, the third of three boys. When Ben was almost 13 years old, the family moved to a home in Maple Shade, NJ. Ben soon discovered his love of golf as a caddy at a 9-hole semi-private golf course near his new home. During his four years at Moorestown High School, he played trumpet in the school band, orchestra, and also had a five-piece swing band. Additionally, Ben was on the swim team for three years in high school.

The U.S. Navy was Ben’s home from 1943 to 1946. His ship carried soldiers across the English Channel to Omaha Beach on D-Day of the Normandy invasion.

Ben took advantage of the G.I. Bill to earn a Bachelor of Electrical Engineering degree at the University of Minnesota. While in Minnesota he met Jeanne Marie Hitsman of St. Paul and they were married August 22, 1947. Upon graduation he went to work for Black & Veatch, Consulting Engineers, in Kansas City in 1951, where he worked in a variety of roles during his 39-year career there. He became a partner in the firm in 1979.

Not long after moving to Kansas City Jeanne Marie and Ben became proud parents of Kayann in 1952 and then Jay three years later. Jeanne Marie had earned a B.S. degree in Elementary Education at the University of Minnesota and a master’s degree in special education from the University of Kansas. Once Kayann and Jay were in school, she taught special education classes for many years in the Kansas City area.

In 1968 Ben and Jeanne Marie became charter members of the Leawood South (KS) Country Club. They were members 24 years and lived on the golf course 14 of those years. This would help shape the next chapter of their lives. Besides golf they enjoyed travel, dancing, opera and playing bridge.

After Ben retired at the end of 1989, they bought a home in Laguna Woods Village in Laguna Woods, CA. They liked it so much that they stopped being “snow birds” after two years, sold their home in Kansas City and moved to southern California permanently. This also allowed them to be closer to Kayann, Jay, his wife Pam and ultimately to their two grandsons, Brandon and Riley. With Grammy and Grampy living close by, both boys were able to spend a lot of time with them over the years.

Ben joined the Orange County Seniors Golf Association in 1991 and even though Jeanne Marie was no longer playing golf, she insisted they go on golf trips. In addition to those, they took many trips abroad, several of which included the entire family. Their most exciting trip was to Antarctica and South Georgia Island. They made 22 Zodiac landings and quietly sat among the penguins. They were also active in the American Ballroom Dance Club, California Club and Club 30, also a dance club. They enjoyed almost 60 years of a loving and adventuresome companionship before Jeanne Marie passed away in February, 2007.

Ben eventually met Kay Trischman, a widow also living Laguna Woods. Over time their companionship grew to the point where they considered themselves best friends. They enjoyed many years together playing golf, dancing and taking many trips.

In 2012 Ben, Jay, Brandon and Riley went on a “guys trip” to visit Normandy to see where he was during WW II. Their trip also included a stop in Paris to sightsee. As a WW II veteran, in September, 2018 Ben was invited to go on one of the Honor Flights to Washington, DC. Jay accompanied him as they toured the WW II memorial and other war memorials there. This trip was extremely special to Ben.

Visitation will be from 7-9 p.m. Friday, January 10 at O’Connor Laguna Hills Mortuary. The memorial service will be held at 11:30 a.m. Saturday, January 11 at Geneva Presbyterian Church in Laguna Woods with the Rev. Dr. Stephen Marsh officiating. Interment will be at 1:00 p.m. at El Toro Memorial Park, Lake Forest, CA followed by a reception at 2:00 p.m. at BJ’s Brewery in Laguna Hills, CA.