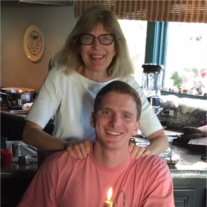 Ben Rogers passed away peacefully in the early morning hours of December 13th.

Ben was the light of all our lives, full of a deep kindness towards all, a generous spirit, and a light-hearted presence. Many have shared how Ben would encourage them, and how much he was looking forward to the future. He touched many.

He and his sister Lily were born in Newtown Connecticut one frozen winter night, moved to Grosse Pointe Farms Michigan at age 3, then to Laguna Beach when 4. Ben grew up a local boy, attending the Presbyterian preschool, TOW Elementary, Thurston and the High School. He was an Indian Guide, a Scout, played soccer, but most of all LOVED playing basketball at the Boys and Girls Club and anywhere, really. His first job was delivering the Laguna Beach Indy in the Mystic Hills neighborhood. He studied Kempo Karate for eight years and also competed at the County level in Track and Field in the Hurdles.

He attended the Army and Navy Academy in Carlsbad and was able to march in the National Memorial Day parade in Washington DC in 2011, playing the snare drum.

Ben attended the University of Arizona, and was planning to finish up at Cal State San Marcos in the fall.

He is survived by his parents, Kate and Jim, his twin Lily, his brother Will, his step-sister Sara, and also his beloved dogs Gracie and Coco.

A memorial service is planned at St. Mary’s Episcopal Church on Saturday, December 30th at 10 a.m. All are welcome to come remember and celebrate Ben.

In lieu of flowers, donations may be made in Ben’s name to the ASPCA.