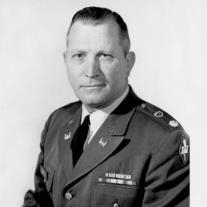 BENJAMIN FRED ROLL was born in Cleveland, Oklahoma to Gwen and Fred Roll on August 19, 1922. He graduated from high school at 16 and harvested crops in the Midwest. Uncle Sam invited him to WWII and he served in the Engineer Corps as a young LT on Saipan, building airfields. During his assignment to March AFB in Riverside, CA he met and soon married Garnet Brooks Roll of San Bernardino, CA. After the War he worked for the Edison Company in the High Sierras measuring stream flow and snow fall. He rejoined the Army and was stationed in Panama, Colorado Springs, South Dakota, Hawaii and Virginia, where at Ft. Belvoir he retired having achieved the rank of LTC. In South Dakota he earned his Bachelors degree in history and was the only graduate with eight children. Following his retirement he relocated his family for a year in Sao Paulo, Brazil and then later moved his family to Newport Beach and worked in real estate and later in the Kentucky oil fields. In 1997 at the age of 74 he was the oldest person to pass the California Bar and received gratifying media attention as well as inspiring family, friends and many strangers.

In 1958, Ben and Garnet joined the Church of Jesus Christ of Latter-day Saints, where Ben served as a Bishop in Hawaii and later in Virginia, and he and his wife Garnet later served as Welfare Services Missionaries in Hawaii, and continued to be active in their Ward in Newport Beach.
Ben is survived by his loving and well-loved wife of 70 years, Garnet, and his brother Billy Jack Roll; he was predeceased by his sister Delpha Bray. He is also survived by his children Lynne (James) Rule, Pamela (Michael) Coughlin, Brooks (Valerie) Roll, Deborah (Patrick) Simich, Jonathan (Debbie) Roll, Thomas (Anita) Roll, Steven (Ursula) Roll, Christopher (Sherri) Roll. He was grandfather to 35 (predeceased by granddaughter Megan Roll, daughter of Brooks and Valerie Roll) and 31 great-grandchildren. Ben Roll died January 1, 2015. He will be honored and missed by many.