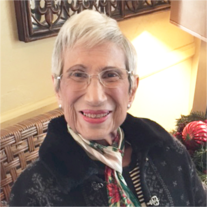 Bella DeGruccio was born Isabella Rose Santoro on May 29, 1922 in the Williamsburg section of Brooklyn, New York. She was the third youngest of ten children born to Italian immigrants. Bella grew up in a brownstone with ‘railroad car’ rooms – a kitchen, living room, and two bedrooms. A bathroom was added later off the kitchen. At five, her only sister married, and this left Bella to do many chores on her own. She scrubbed the halls and stairways of the brownstone, as well as ironing the white work shirts for her older brothers. This is how she became the ‘greatest ironer in the world.’

When Bella was seven a new family with ten children moved across the street. The youngest child was a seven year old boy named Joseph Charles DeGruccio. The two became friends. Little did they know that God’s future plans for them included marriage to each other.

After graduating high school, Bella worked as a seamstress. She and ‘Chippy’ Joe were dating when WWII broke out. Chippy Joe left to join the Navy and Bella was left behind to continue working and encouraging her boyfriend from afar. Finally, after knowing each other since childhood, Bella and Chippy Joe were married on July 16, 1944. Surprisingly, it hailed that day, which rarely, if ever, happens.

After WWII ended Joe worked in the garment district, but wanted more security for his new family. Daughter, Maria, was born in 1946, so in 1948 Joe moved the family to California and settled in Los Angeles. Bella cried every day that first year because she missed her family so much, so in 1949 they went back to Brooklyn for a visit. At that time Bella was able to see that growing up in California was best for her child. From that moment on she embraced California as home. In the early 1950’s the DeGruccio’s moved to the San Fernando Valley. In 1953 their second child, Anthony, was born. Sadly, Anthony died from leukemia in 1961.

After their daughter married, had two children, and moved to Mission Viejo, Bella and Joe moved there as well in 1979. They lived together in the same house until Chippy Joe died in 2009. Bella stayed in the house until 2014, when she moved to the Las Palmas senior living residence.

Bella’s life has been filled with much joy. She has two grandchildren and five great-grandchildren. She loved to show them off to her friends at Las Palmas. Bella enjoyed her time at Las Palmas immensely. She made many new friends, reconnected with her friend of over sixty years, Lee Fiore, and was thrilled to be named an ambassador.

Bella died peacefully at Mission Hospital on April 7th, surrounded by family and friends. Her life will be celebrated in a memorial service at Compass Bible Church in Huntington Beach on Saturday, April 29th at 11:00 am.