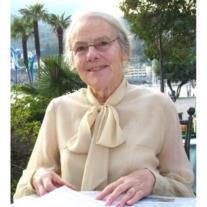 Beate Wilder-Smith was born in Breslau, Germany, the second of three daughters (Rosemarie, Beate, Christiane) of Reverend and Mrs Wilhelm and Erna Gottwaldt. She studied music at Frankfurt University (Germany) and Geneva University (Switzerland), where she also majored in French.

In 1949 Beate married Prof A.E. Wilder-Smith, who, in addition to developing new drugs for conditions such as cancer, leprosy and TB, was a scientist and lecturer on creationism and scientific alternatives to evolution, as well as advisor to NATO and others on drug abuse. Three sons and a daughter were born in Germany, USA, Norway and Switzerland respectively.

The family moved 23 times – often to different countries. Because the children’s schooling was so often interrupted by these moves, Beate acted as perennial tutor for the family in a wide range of subjects. In addition, she taught music history and theory, choir and orchestra at schools all over the world.

Beate helped her husband to write his many books, and translated several of them – as well as other authors’ books – into German. Over a period of 15 years, Beate and AEWS had a profound Christian influence on secular University campuses through their ‘Pro Universitate’ seminars, featuring innovative multidisciplinary courses on Creationism, Bible and Science. Their home in Switzerland often served as a pre- or post-retreat center for participants to continue conversations and Beate was the ever-gracious organizer and hostess of these informal – sometimes large – gatherings.

After her children left home for Universities abroad, she accompanied her husband on his lecture tours all over the world, often partnering with him in personal and family counseling. All 4 children are now Professors in their respective Medical Fields at International Universities (Oliver and Elly, Petra and Marc, Clive and Luzia, Einar and Annelies).

Her 5 grandchildren were her pride and joy (Jonathan, Adrian, Leif, Annika and Kirsten). Over the past 20 years, she has lived in California with her daughter and son-in-law’s family.

As a part of her strong relationship with Mariner’s Christian School, she regularly shared perspectives on war – particularly WW2 – with students and staff there. She wrote one book of her own ‘The Day Nazi Germany Died’, (published by ‘The Word for Today’), telling the story of her family’s flight from the Russians at the end of WW2, and their Odyssey to Frankfurt – an inspiring tale of faith and survival during a time of terror and tragedy.

Service times: January 24 (Saturday) start at 12.00, after the service there will be refreshments and a time for sharing.

For those of you not able to attend the service, the service will be webcasted live Saturday, January 24, 2015 from 12.00 (PST) via the following Skype link: Petra Wilder-Smith.

In lieu of flowers, donations may be made to New Life Beginnings, http://newlifebeginnings.org/?page_id=127.